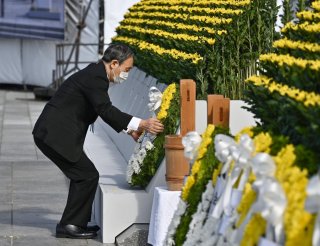 Since 1994, every U.S. administration has been tasked with developing a Nuclear Posture Review (NPR). Each time the review comes up the question arises as to whether or not the United States will declare a “No-First-Use” policy, or NFU. An NFU policy would commit the United States to never using nuclear weapons first—whether in response to any non-nuclear threats, or as a preemptive first strike.

The United States claims that one of the barriers to declaring an NFU policy is that U.S. allies rely on this policy stance for their own security. Washington’s other fear is that if the United States did not have such a policy, its allies may develop nuclear weapons of their own. On the latest episode of Press the Button, Miyako Kurosaki and Gregory Kulacki tell co-host Michelle Dover that this argument simply does not hold true for Japan.

Kurosaki and Kulacki, along with Jennifer Knox, co-authored the recent report “Japan Is Not an Obstacle to US ‘No-First-Use’ Policy.” Kulacki, the China project manager at Union of Concerned Scientists, and Kurosaki, a research coordinator at the Hiroshima Organization for Global Peace, explain that the history of nuclear weapons use in Japan has made it politically impossible for the Japanese government to develop nuclear weapons.

When the United States dropped atomic bombs on Hiroshima and Nagasaki, leaving over 200,000 dead and tens of thousands more to cope with illness from nuclear fallout, Japanese civilians became invested in the disarmament movement. Further, the country committed to a nonproliferation stance, outlined in the country’s three non-nuclear principles. Kurosaki explains these principles, developed in 1967, “prohibit the possessing and producing of nuclear weapons, and introducing these weapons, mainly US nuclear weapons, into Japanese territory.”

She highlights that these principles are so key to Japanese policy that “the principles have been mentioned in [the] Prime Minister’s speech at the ceremonies in Hiroshima and Nagasaki every year since 1994.” When they were left out of Prime Minister Abe Shinzo’s speech in 2015, he had to publicly apologize for omitting them.

So, where did the United States get the idea that a U.S. NFU policy would make Japan a proliferation risk? As Kulacki explains, “you really have to ask” the U.S. government. While there are accounts of a small number of Japanese officials informing U.S. counterparts of their desires for a U.S. first-use policy, the challenge with these accounts is that the talks between the United States and Japan on the nuclear issue have been kept secret.

Kurosaki explains that publicly, the U.S.-Japan Mutual Security Treaty of 1960 required “the introduction of nuclear weapons […] to have […] prior consultation,” but negotiators kept this element ambiguous, using “a don't ask don't tell bureaucratic arrangement,” allowing the United States to secretly transit nuclear weapons into Japan on naval vessels.

As Kulacki points out, “The fact that they're afraid to even admit that the US submarines carrying nuclear weapons visited a Japanese port, even though everybody already knew it [in theory], suggests that they certainly don't have the political agency to start to pull Japan out of the NPT [Treaty on the Non-Proliferation of Nuclear Weapons] and start a nuclear weapons program.”

Kulacki and Kurosaki conclude that public opinion and Japan’s three nuclear principles put Tokyo in a place where developing a nuclear weapons program is off the table. In addition, their report outlines that Japan’s two internal inquires on the nuclear question both concluded that Japan had no logical reason to develop its own nuclear arsenal. As Kulacki states, all this evidence points to the reality that “there is no need to worry that Japan is going to quit the NPT and develop its own nuclear weapons, if the United States makes this change in nuclear weapons policy.”

The entire interview with Miyako Kurosaki and Gregory Kulacki is available here on Press the Button. The full report: Japan Is Not an Obstacle to US “No-First-Use” Policy is available through the Union of Concerned Scientists’ website.