The U.S.-China Clash Question We Need to Ask: “How Does This End?” 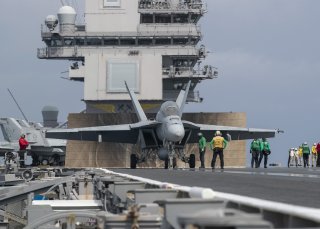 The coronavirus fever gripping America will eventually subside, but its effects will linger. Though China and the U.S. have both responded poorly to the disease, many Americans are calling for China to be held accountable for not taking actions early on that would have mitigated this pandemic. In other words, coronavirus has put deteriorating U.S.-China relations on the fast track. In this emotionally charged environment, China hawks have found ample space to stretch their wings. But hawkishness has done much to weaken the U.S. and distract from our legitimate priorities at home—the growing consensus around this approach must be more closely examined.

Before having their way, these China hawks should answer some critical questions, not the least of which is, “How does this end?”

China’s response in those early days could have stemmed the tide. Silencing doctors and suppressing information were mistakes. Along similar lines, the U.S. could have had a more decisive response early on. Flights from China to the U.S. were not stopped in time (and domestic travel remains a vulnerability); the U.S. was caught unprepared to conduct wide-scale testing; Health and Human Services, under the leadership of Secretary Alex Azar—whose position has been de facto usurped by Dr. Fauci—made critical mistakes in the handling of American evacuees from Wuhan; Senators knew the severity of coronavirus as early as January 24, when there was a classified meeting that has made recent headlines for an alleged insider trading scandal—and let’s not forget Fox News host Tucker Carlson made a personal appeal to President Trump, imploring him to view the virus as a health problem, rather than a political one.

Failures in the U.S. and China alike notwithstanding, anti-China sentiment has surged in recent months—with the fumes of the Hong Kong protests still lingering in the air today. To be sure, China represents a unique challenge for the U.S.—it’s the world’s second-largest economy, has a powerful military capable of denying the U.S. easy access to its shores, possesses a nuclear arsenal, and spends much more of its GDP on military investments.

Competition is inevitable, but building that approach off the standard U.S. foreign policy playbook is not reassuring. From Afghanistan to Venezuela to North Korea, U.S. failures abound—China presents a far greater challenge.

Deterring a war with China will become the organizing principle for the Pentagon (if the U.S. can finally extricate itself from the Middle East and unwind the GWOT). However, civilian critics of China are being noticeably coy about their prescriptions for confronting Beijing. As an avatar of the China hawks, Sen. Tom Cotton says Beijing must “pay,” be held “accountable,” and face a “reckoning.” Vague phrases, to be sure, but widespread beyond Cotton’s Twitter account. Taking some responsibility and expanding on the particulars would be welcome.

But you don’t need many particulars to realize one of the principal objections is that of U.S. medical supply lines being located in China. A degree of autarky in key industries is a worthy goal for the U.S., but it’s not something that can be accomplished overnight. It will take time to bring any supply lines back to the U.S. (or at least out of China). That sort of delay during a pandemic is untenable—like it or not, we’re stuck with China until this subsides.

But coronavirus seems likely to accelerate the trajectory of U.S.-China competition—and hawks will be pushing harder than ever for confrontation. Relocating supply lines is one thing, but other options carry more risk. The most realistic options are a war of words, sanctions, and military confrontation. Each of these is dangerously flawed.

Have the administration make the cliché statement of, “We stand with the Chinese people, not the communist regime,” and you ignore the fact that, as in any country, there are people who legitimately do support the government—in China, this number could be in the hundreds of millions. There’s also likely to be a significant number who are relatively ambivalent about the government and Xi Jinping, but who would not appreciate a foreign nation meddling in their affairs. We were not greeted as liberators when we invaded Iraq, and it’s deluded to think any significant number of Chinese are yearning for Americans to deliver a payload of “freedom” to their proud country.

Sanctions have brought few victories and—as can be seen in the case of Iran—do little to moderate the target country’s behavior; it tends to boost hardline voices in the country. A rally around the flag effect has been observed, and a sanctioned China would be no exception.

Military confrontation remains unlikely—though not impossible, especially if we fail to adopt a defensive defense strategy in Asia.

But military confrontation against Beijing would harm U.S. interests. It would also worsen our relationship with one of the world’s most populous countries, one that showed no fear in fighting back even before it had its own nuclear deterrent. Today, the worst case would be a war between the two nuclear-armed countries.

In other words, China hawks have few serious options, as already conveyed by their tiptoeing around offering prescriptive policies. U.S. strength comes not from telling other countries how to behave, but via our prosperity and focusing on our interests—those interests, by the way, that lie almost entirely in our internal affairs.

China hawks will not likely accept this, so others must advocate and advance a more prudent plan that better positions us for a long-term rivalry. A high time preference recklessness has characterized U.S. foreign policy for decades. There is still time for a more thoughtful approach to American priorities in the face of a rising China, but that window may yet slam shut if our approach is impulsive and emotional.

Michael R. Hall is the communications manager of Defense Priorities and a geopolitical analyst. Follow him on Twitter: @michaelryhall.