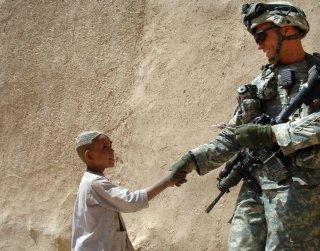 The chaotic end to the U.S. mission in Afghanistan is leading to a bumper crop of alarmist predictions. One of the most prominent is that the Afghanistan fiasco has severely damaged the credibility of the United States. America’s adversaries are supposedly waiting to exploit that situation and move against other, now demoralized, U.S. allies. Having “abandoned” Afghanistan, so the argument goes, all of Washington’s international security commitments are now suspect and open to a potential challenge.

Those sounding the alarm see three especially worrisome arenas. The confidence of America’s European allies in the U.S. security commitment allegedly has been shaken, with some NATO members even questioning the continued viability of the Alliance. Czech president Milos Zeman charged that because NATO had failed in Afghanistan, its legitimacy was in question. He argued that distrust in the U.S.-led alliance “from a number of member countries will grow after this experience because they will say—if you failed in Afghanistan, where is a guarantee that you won't fail in any other critical situation?"

China supposedly is salivating to take control of the South China Sea and even move militarily against Taiwan. South Korea must now ponder the reliability of its bilateral alliance with Washington if North Korea turns even more aggressive. Rep. Michael Waltz (R-Fla.) epitomizes fashionable alarmism. “If I were in Taiwan or Ukraine right now watching all this unfold, I would be terrified knowing this is how the United States will react under this administration,” he said in a social media post on Twitter. Even Donald Trump Jr. said via a social media post that “Whatever China’s timeline was before trying to seize Taiwan, we all know they’re licking their chops now, knowing there will never be a weaker U.S. administration in power.”

Allegations that the loss of even one security client fatally damages U.S. credibility are nothing new. Supporters of Washington’s global empire of bases and client states insisted that the collapse of South Vietnam would lead to multiple probes to undermine more prominent and important U.S. security commitments. Indeed, Moscow and Beijing were supposedly going to use so-called wars of national liberation to acquire new clients and bases of operation against the United States and the democratic West. Critics cited the emergence of pro-communist regimes in such places as Nicaragua and Angola, and (ironically) Afghanistan as “proof” of the strategy’s success. In reality, the acquisition of such politically unstable and economically dysfunctional clients became a burden on the USSR. The collapse of the Soviet empire between 1989 and the fall of 1991 thoroughly discredited the argument that South Vietnam’s demise had fatally undermined U.S. credibility and would lead to communism’s global triumph.

The latest apocalyptic predictions are as fallacious as the earlier batch. Credibility regarding a security commitment is principally determined by two factors: the importance of the issue at stake to the guarantor power, and the military clout that the guarantor power has available to enforce the commitment. The Soviet Union was not inclined to challenge Washington’s NATO commitment because Soviet leaders concluded that the United States probably was willing to incur great costs and risks to prevent Moscow from gaining control of non-communist Europe’s crucial strategic and economic assets.

The situations that involve NATO and U.S. commitments to other allies such as Taiwan and South Korea are not as clear-cut in a post–Cold War environment. Also, Washington certainly does not view them in the same light as Afghanistan. Given the importance of those East Asian clients, for example, U.S. leaders are not likely to abandon them—especially if Beijing would be the principal beneficiary. Moreover, the United States has massive air and naval forces deployed in the western Pacific region and is contemplating strengthening that presence. Such sophisticated weapon systems are not especially effective in dealing with guerrilla fighters in a Third World civil war (as the events in Afghanistan confirmed) but they are far more relevant in a conventional military showdown between great powers. Consequently, an adversary dare not casually dismiss the ability of the United States to fulfill its commitments in East Asia.

Even though experts have argued that U.S. security policies toward Taiwan and South Korea need to be reviewed and reconsidered, equating Washington’s probable response to a power play against either Taipei or Seoul with the decision to abandon Kabul is preposterous. Afghanistan never had anything even faintly resembling the strategic or economic importance to the United States that Taiwan, South Korea, and the major NATO countries possess. The credibility level of the latter commitments remains where it was before the August events in Afghanistan.

Like other Biden administration officials, Secretary of State Antony Blinken got many things wrong about the exit from Afghanistan. However, he is entirely right about one major point. “Most of our strategic competitors around the world would like nothing better than for us to remain in Afghanistan for another year, five years, ten years, and have those resources dedicated to being in the midst of a civil war,” Blinken told CNN. Jettisoning ill-advised obligations to weak foreign clients that have little or no intrinsic value to America’s security actually benefits this country in the long term. Retaining the Afghanistan albatross in the name of preserving U.S. credibility would have been the hallmark of folly.

Ted Galen Carpenter, a senior fellow in security studies at the Cato Institute and a contributing editor at the National Interest, is the author of twelve books and more than 950 articles on international affairs.