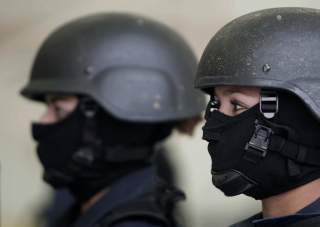 President Donald Trump’s response to the massacre of an American ex-pat family by drug cartel gunmen in northwest Mexico was both emotional and suggestive of a policy response that could have far-reaching implications for both Mexico and the United States. Trump reacted to the incident with a tweet that stated “this is the time for Mexico, with the help of the United States, to wage WAR (sic) on the drug cartels and wipe them off the face of the earth. We merely await a call from your great new president!” He added: "If Mexico needs or requests help in cleaning out these monsters, the United States stands ready, willing & able to get involved and do the job quickly and effectively."

It was not exactly clear as to what Trump had in mind regarding the nature of such “help.” Perhaps it was merely an offer for enhanced sharing of information about the cartels from the FBI, the Drug Enforcement Administration (DEA) and other U.S. law enforcement agencies. Such an order from the president would be merely a modest increase in the assistance that those agencies already provide to Mexico and other drug-source countries. Also, it is possible that Trump was offering to use the CIA and other U.S. intelligence agencies to help the Mexican government track and disrupt the drug cartels. Even that move would not constitute a dramatic increase in Washington’s participation in Mexico’s longstanding war on drugs.

There is another possibility, though, that cannot be ruled out. Does the Trump administration now contemplate direct U.S. military participation in the worsening conflict between the Mexican government and several major drug cartels? Such a role could take two forms. One initiative would entail drone strikes and other applications of airpower against targets in areas of Mexico under the de facto control of a cartel because government security forces are ineffective or have withdrawn entirely. The other possibility is that Washington would deploy Special Forces personnel on the ground to attack armed cartel units and help the Mexican government regain control over areas in which the drug gangs have run amok. Either move would be fraught with multiple negative consequences.

Some of Trump’s closest supporters in Congress certainly are lobbying for a tougher policy, including a military component, against the cartels. In two interviews on Fox News, Sen. Tom Cotton (R-AR) warned ominously: “If the Mexican government cannot protect American citizens in Mexico, then the United States may have to take matters into our own hands.” Cotton emphasized that “our special operations forces were able to take down [ISIS leader Abu Bakr] al-Baghdadi in Syria a couple weeks ago,” and they did the same “to Osama bin Laden in Pakistan eight years ago.” He added, “I have every confidence that if the president directed them to do so, that they could impose a world of hurt on these cartels.” Clearly, he had something more in mind than increased sharing of intelligence information with the Mexican government. Indeed, he scorned President Andres Manuel Lopez Obrador’s policy of “hugs, not bullets,” and countered that the only effective way to fight the cartels was with “more bullets and bigger bullets.”

Trump’s offer of assistance to Obrador is not the first time that he has hinted about possibly involving the U.S. military in Mexico’s drug war. Just weeks after entering the White House, Trump adopted a similar stance in a session with then-president Enrique Pena Nieto—and did so in even less cordial terms. “We are willing to help you,” Trump stated. “But they [the cartels] have to be knocked out, and you have not done a good job of knocking them out.” Trump affirmed that he knew “how tough these guys are—[but] our military will knock them out like you never thought of.” The U.S. president assured Pena Nieto that he preferred to assist the Mexican military rather than take direct action, but the implied, menacing alternative was apparent.

Obrador thanked Trump for the more recent offer of military assistance, but he quickly rejected it. Indeed, Obrador’s administration seems committed to addressing the underlying causes of drug violence rather than trying to solve it through military force, as his predecessors attempted. Trump’s “offer” of help is a direct challenge to that new approach and risks causing serious tensions in bilateral relations. Even worse, if the United States pursued airstrikes or other military options in the name of “national security” over the Mexican government’s objections, that action would create an alarming crisis.

Mexican officials and the Mexican people have long memories, and they recall clearly the numerous bullying episodes by the “Colossus of the North” in both the nineteenth and twentieth centuries. Even a limited U.S. military involvement in Mexico would revive those memories and feelings of resentment.

In addition to the danger of alienating Mexico’s government and population, using U.S. military power against the drug cartels could well lead to another unwinnable, seemingly endless war for the United States. We don’t need another quixotic adventure to go along with those in Afghanistan, Iraq, Syria and Yemen. The cartels are powerful because there is a sizable consumer market for drugs in the United States and other countries. The prohibition policy to which Washington and its allies stubbornly cling drives up prices, thereby enriching and empowering the organizations that control such a lucrative commerce. Drone strikes or U.S. special forces missions will not solve that dilemma. Trump needs to resist the temptation to adopt a futile, counterproductive military option in Mexico.

Ted Galen Carpenter, a senior fellow in security studies at the Cato Institute and a contributing editor at the National Interest, is the author of twelve books and more than 850 articles on international affairs. His books include Bad Neighbor Policy: Washington’s Futile War on Drugs in Latin America (2003) and The Fire Next Door: Mexico’s Drug Violence and the Danger to America (2012).