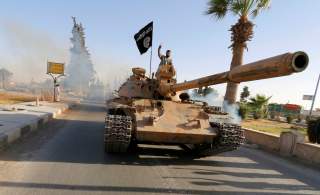 It took a lot more time, patience, and ordnance than expected, but after a two-month offensive in the dusty, Syrian border village of Baghouz, the U.S.-supported Syrian Democratic Forces finally made the announcement the world was waiting for: the Islamic State’s caliphate is history. For the millions of Iraqis and Syrians who were subjected to the group’s brutality and dogmatic extremism, the SDF’s final clearing operation in the Islamic State’s remaining speck of land in the Mediterranean must have come as a cathartic moment.

Governments the world over are gushing with celebration. President Donald Trump, who days earlier unveiled a map for reporters showing how little land the Islamic State occupied, will likely claim all the credit for himself. British prime minister Theresa May issued a statement calling the capture of Baghouz “a historic milestone.” German foreign minister Heiko Maas and French president Emmanuel Macron issued their own congratulations to forces on the ground. And the Kurdish fighters who did most of the fighting and the dying capped off their success in celebratory fashion, complete with a parade and a marching band, musical instruments in tow.

One can’t blame them for basking in their success. The road between the Islamic State and the defeat of the caliphate has been a long and windy one, with its fair share of rubble along the way. The four and a half years of combat against the caliphate entailed incredible sacrifices from the Iraqi soldiers, militias, and Kurdish fighters on the front-lines. Tens of thousands of them were killed in the combat and the Iraqi Counter Terrorism Service—the Iraqi military’s cream of the crop—suffered 40 percent losses during the 2017 battle for Mosul, the most vicious urban combat since U.S. troops stormed Fallujah more than a dozen years prior. And then there were Iraq and Syria’s ethnic minorities, who were imprisoned, exiled, tortured, killed, and sold into sexual servitude. For all of them, the end of the caliphate could not have come soon enough.

In the summer of 2014, the Islamic State was like a fifty-foot monster terrorizing the world. The group’s militants were vanquishing entire Iraqi army divisions in a matter of days, capturing some of Iraq’s most prized real estate. Videos of beheadings, including those of several Americans, were uploaded in sleek and highly professional videos and broadcasted on America’s cable news networks. Islamic State fighters, dressed in black face-masks, were on the beaches of Libya threatening to take the fight to Rome.

That very same organization is now but one terrorist group among many that inhabit the Middle East, North Africa, and South Asia. The Islamic State’s thirty-four thousand square miles of territory is down to zero. Some of the same terrorists who caused so much misery to so many are now locked in makeshift detention facilities, with dirt and grime on their faces. Some of the tens of thousands of foreign fighters who left their previous lives in the United States, Europe, and Asia to live in the caliphate are caught in a legal no-man’s land, banished by their governments as traitors.

All of this sounds pretty good. And yet it would be a significant error to assume that the physical destruction of the caliphate is the same as the destruction of the Islamic State as a terrorist movement. It most certainly is not; the U.S. intelligence community has made exactly that point in their assessments and testimony to members of Congress. The Islamic State may be down, but it is not out.

The Islamic State’s transformation from a quasi-state to a relatively unspectacular insurgent group is already well underway. By the United Nation’s own estimates, there could be as many as twenty to thirty-thousand fighters prowling the villages, deserts, and plains of Iraq and Syria. The Pentagon, meanwhile, has admitted in previous reports that it can’t say with any degree of certainty how many militants remain in the Islamic State’s ranks. Just like their terrorist forefathers who went to ground, took their time, and used the Iraqi government’s weaknesses to their advantage, the Islamic State will use the same exact tactics in the months and years to come in order to keep itself in business. Given the four-plus years of senseless and indiscriminate killings, extortion, and punishment, recruiting Iraqis and Syrians to the cause is unfathomable for the group at the moment. The goal right now is one of survival, plain and simple.

The foreign-policy establishment in Washington has been making the case that because so many Islamic State sympathizers remain alive, the U.S. military must remain on the ground for the foreseeable future. Surely if U.S. troops withdraw from Northeast Syria or downsize their presence in neighboring Iraq, the argument goes, the Islamic State will be granted a reprieve at a time when the boot is on its neck.

This line of thinking is prevalent across mainstream commentators and leaders. Indeed, it was only a month ago when outgoing CENTCOM Commander Gen. Joseph Votel made his disagreements with a U.S. troop withdrawal publicly known.

The caution notwithstanding, the fact remains that there is only so much the United States can do to guard against the reemergence of terrorist groups in general and the Islamic State in particular. American troops can’t, for instance, order the Iraqi government in Baghdad to stop treating its Sunni citizens as terrorist sympathizers or enemies of the state plotting to storm the capital and resurrect Sunni-dominated rule.

American troops can’t convince an all but victorious Assad regime to cooperate with a largely dormant UN-led political process, engage with their political opponents to write a new constitution, or endorse the holding of internationally-supervised elections.

American troops don’t have the power or capability to address decades-old ethnic animosity between a Turkish government in Ankara notoriously suspicious of Kurdish intentions and a Syrian Kurdish community that views the Turkish army as a threat to its very existence.

American troops can’t force their counterparts in the Iraqi security forces to refrain from mass sweeps in Sunni neighborhoods, where young men are taken into custody based on nothing but a tiny sliver of dubious evidence—or any evidence at all.

In other words, none of the core reasons for the Islamic State’s very being—systemic corruption; horrendous public services; predatory and cruel security institutions; bloated bureaucracies that serve more as jobs-programs for the well-connected than public goods for the whole of society; political leaders who pit their nation’s ethnic and sectarian communities against one another in order to sustain themselves in power—can be fixed with the allocation of American military power. The Trump administration could theoretically deploy two million U.S. troops in the Middle East for eternity and it would still only have a marginal effect on the region’s central problems. Indeed, keeping the U.S. military in bases along the Iraq-Syria border indefinitely is the geopolitical equivalent of prescribing pain killers for a tumor; it may provide the patient with immediate relief, but it does nothing to stop the tumor from growing.

The Islamic State’s caliphate is wiped from the map. But it could just as quickly be replaced with an even more rigid system of jihadist oppression and social control if the region’s politicians continue to neglect the political, economic, and security crises that fuel the desperation and anger that often leads to a terrorist resurgence. Unfortunately, there is little evidence to date Arab governments are learning this lesson.

Daniel R. DePetris is a columnist for the Washington Examiner and the American Conservative and a contributor to the National Interest.