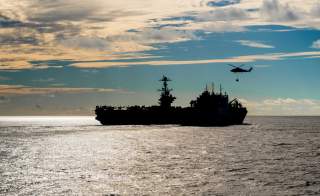 Is the world at a point of no return in the South China Sea? Judging by the comments coming from the mouths of senior U.S. and Chinese officials, that would certainly seem like the reality. Both sides have dug into their maximalist positions, with Beijing viewing the expansive blue waters off the coast of East Asia as sovereign territory and Washington regarding China’s militarization of the area as a transparent rewriting of the international rules.

Neither side is backing down—nor does either country seem interested in a compromise. During an interview on November 13, Vice President Mike Pence was asked about China’s failure to meet American demands over unfair trade practices, political interference, and military maneuvers in the South China Sea. Pence’s response was “Then so be it... We [the U.S.] are here to stay.” The People’s Liberation Army-Navy, it seems, can try to bully its Southeast Asian neighbors and construct artificial islands with anti-ship missile batteries all it wants. But, as far as Washington is concerned, America will continue flying and sailing in the open seas whether Chinese President Xi Jinping likes it or not.

It’s all fun and games, of course, until someone gets hurt. It was less than two months ago when a Chinese destroyer came dangerously close (forty-five yards) to the USS Decatur, a brazen challenge from the Chinese Navy that could have resulted in a disaster at sea if U.S. sailors didn’t avoid a collision. An incident was fortunately prevented, but the fact American and Chinese warships and aircraft are increasingly coming into close proximity in the waters and airspace of the South China Sea means that it’s possible the two largest economies and military spenders could succumb to what Harvard University’s Graham Allison calls the “Thucydides’s Trap.” That Trap is a scenario whereby a rising power and an established power seeking to stay on top go down the rabbit hole of a full-blown confrontation. Moreover, as Allison has written, conflict can even occur when business-as-usual prevails, often through miscalculation, fear, paranoia, and competition.

As unbelievable as a war between the United States and China may seem at present, history shows that the unbelievable can happen.

The South China Sea is not at all ripe for a final settlement. But the least Washington and Beijing can do is brainstorm about procedures and techniques that aim to promote more predictability and ensure another incident at sea doesn’t trigger a shooting war.

The United States has made it abundantly clear through meetings with Chinese officials and public comments that freedom of navigation exercises in the South China Sea will continue. For better or worse, Chinese officials have made it equally clear that they see these same exercises as a hostile attempt by an aggressive superpower to limit China’s flexibility in what it claims as Chinese territory.

Communication in such a situation is crucial. Washington and Beijing should establish a hotline at the working level between their respective military officers responsible for overseeing operations in the South China Sea region. This is hardly a novel concept. In 2008, the United States and China set up a direct line between their defense ministers, an operational link that has rarely been used in the ensuing decade. In August 2017, U.S. Chairman of the Joint Chiefs Gen. Joe Dunford and Gen. Fang Fenghui, the chief of China’s Joint Staff, did the same with a channel of their own. Such dialogue mechanisms are common-sense measures designed to solidly a constructive professional relationship among the top civilian and military defense leaders, enhance understanding between both sides, and form a reliable contact point that can be used quickly to de-escalate an incident before it turns into a crisis. China and Japan both saw the wisdom in such a channel for possible friction in the East China Sea; there is no reason why America and China can’t do the same in waters that are even more congested.

While the United States and China may have vastly different positions on the status of the islands and reefs located in the South China Sea, both countries nevertheless have a mutual interest in averting a conflict—one whose cost would reverberate far outside the region. The Trump administration would be within its rights to continue to conduct freedom of navigation exercises, but the missions may be less objectionable to the Chinese if the Pentagon provides Beijing with advanced warning. Such an arrangement would be a win-win for both; indirectly granting China a degree of respect about its paramount place in East Asia while giving the United States continuity of the freedom of navigation principle.

When Presidents Trump and Xi meet in Buenos Aires at the G20 Summit for what is widely expected to be a combative discussion about trade, both leaders could explore the feasibility of a joint American and Chinese military exercise in the South China Sea. In 2016, U.S. and Chinese troops conducted a small, multi-day joint drill on disaster relief scenarios in China’s Yunnan province. Although a similar exercise in disputed waters would be inherently more difficult regarding politics, military-to-military collaboration could alleviate some of the tension that has built over the previous two years.

A grand resolution to the South China Sea problem is currently beyond either country’s ability. It may take new leaders in Washington and Beijing before a settlement is finalized—and even then, the clash of ideologies and the geopolitical rivalry encompassing the relationship may be too tall of an obstacle to overcome. In the interim, America and China have a responsibility to ensure that one of the world’s most critical waterways doesn’t become the epicenter of a catastrophic world war that neither state has an interest in fighting.