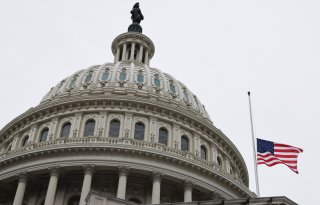 At a parade commemorating the seventy-fifth anniversary of the founding of North Korea’s ruling party, dictator Kim Jong-un unveiled a massive new intercontinental ballistic missile (ICBM). If genuine, it would be one of the largest mobile ICBMs in the world. Many pundits in Washington warned that the new weapon proved Pyongyang was a “dangerous global threat.”

Yet the objective reality is this: America’s massive military advantage in both conventional and nuclear capacity means the balance of power remains decisively on the side of the United States and Kim remains firmly deterred. Conventional thinking in Washington, however, views North Korea as a perpetual threat—and often advocates military solutions. Such thinking has weighed heavily on the last three administrations.

President George W. Bush moved North Korea from merely an adversary into the camp of an opponent in his 2002 State of the Union speech, labeling North Korea as part of an “axis of evil.” Preoccupied by the wars in Iraq and Afghanistan, Bush paid little attention to North Korea, which conducted its first successful nuclear test four years later. He didn’t push the matter militarily, however, because the American people wanted to get out of the wars they were in, not look for new ones to start.

Barack Obama rode that wave of voter discontent into the White House in 2008, promising to get out of the Iraq war. President Barack Obama vowed to end the war in Afghanistan. Despite a three-year break in deployed troops to Iraq, American service members were still on the ground fighting when he left office. He effectively ignored North Korea throughout his two terms, avoiding any substantive diplomatic engagement.

Donald Trump’s first year in office featured routine threats toward Pyongyang, with “all options on the table” to bring North Korea to heel. Beginning in 2018, however, Trump changed his tune and became the first sitting U.S. president to meet in person with the leader of North Korea, dramatically reducing tensions between the two countries.

Though negotiations stalled after the Hanoi Summit in February 2019, Trump has not returned to military threats, seeming to recognize what most of the rest of our country has: there is no utility in risking war with a country against whom our overpowering conventional and nuclear superiority keeps us safe. In fact, the action that offers the most positive potential is expanding diplomacy. South Korean president Moon Jae-in could help Trump achieve a breakthrough.

In a speech before the UN General Assembly last month, Moon said he believed the best way for North and South Korea to “advance into an era of reconciliation and prosperity,” would be to formally end the Korean War. “The end-of-war declaration,” Moon explained, “will, indeed, open the door to complete denuclearization and permanent peace regime on the Korean Peninsula.” Kim appeared to reciprocate earlier this month when he made some unusually positive statements towards the South.

Since the failure in Hanoi, North Korea has often returned to heated anti-South rhetoric in its public statements. But at the seventy-fifth anniversary of the founding of North Korea, Kim said he sent a “warm wish . . . to our fellow countrymen in the south,” and that he looked forward to the day when “the north and south take each other’s hand again.”

Whether Americans give Trump a second term in next month’s election or Biden comes out on top, the trend in America is clearly moving towards a more realistic foreign policy that prioritizes diplomacy above the militancy that has given rise to the forever wars around the world.

For example, a YouGov poll commissioned by the Charles Koch Institute and completed in the summer of 2020 found that 74 percent of Americans wanted to withdraw our troops from Iraq and 76 percent wanted to withdraw U.S. troops from Afghanistan. The numbers from veterans—those who have done the fighting and dying over the past two decades—was just as stark: 73 percent favored ending the war.

The trends are clear. Americans across the spectrum recognize with increasing clarity that the militaristic foreign policy of the past two decades has failed. More diplomacy, not militancy, is what the people want. Their rationale is as simple as it is reasonable: the people are tired of failure and are eager to try a new path that has a greater chance of success.

Daniel L. Davis is a senior fellow for Defense Priorities and a former lieutenant colonel in the U.S. Army who deployed into combat zones four times. He is the author of “The Eleventh Hour in 2020 America.” Follow him @DanielLDavis1.