Why America Should Bring Home Its Nuclear Weapons 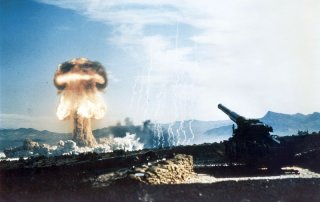 American tactical nuclear weapons in Europe have outlived their usefulness and should be brought home, argued Mike Sweeney, national security expert and fellow at the libertarian think tank, Defense Priorities.

“It’s kind of a forgotten issue,” he explained in an interview with the podcast Press the Button. During the Cold War, the United States scattered scores of smaller, so-called “battlefield” nuclear weapons throughout NATO-aligned Europe to offset the conventional superiority of Soviet forces on the Continent.

As superpower tensions faded along with the Soviet Union, US presidents began to bring these weapons home. But roughly 150 of them remain, raising serious issues surrounding strategy and alliance politics.

In terms of strategy, it’s unclear why the bombs are still needed in Europe. The main threat these weapons ostensibly offset - a Russian “escalate to de-escalate” strategy where a nuclear demonstration coerces NATO into backing down during a fight in the Baltics - likely doesn’t exist.

“In looking at Russian doctrine, that’s not what they have said,” Sweeney explained. “Over the years they’ve actually narrowed the circumstances under which they’d be willing to use nuclear weapons.”

This may be especially true of the Baltic region, where Russia already holds a sizable military advantage. In a series of RAND wargames held in 2014 and 2015, Russian conventional forces overran Estonia and Latvia in less than three days. In such a scenario, Sweeney asked, why would Moscow feel the need to order a nuclear strike?

And yet, even if they did, it’s not clear that the American tactical nuclear bombs would - or, indeed, could - play a role in any response.

The first issue is a procedural one. As Sweeney explained it, in order to use the bombs, local commanders need permission from the NATO commander and military committee, who would then forward the request to the American president. Even if the president authorizes their use, the individual NATO states actually hosting the weapons could theoretically veto the strike.

But assuming NATO is in complete agreement (and that is a big assumption), actual use of US tactical nuclear weapons might still be nullified by basic operational questions.

The first one is delivery. “The weapon in question, the B61, is a basic free-fall bomb,” explained Sweeney, while the NATO planes carrying them are “non-stealthy, fourth-generation fighters” prone to being shot down by advanced Russian air defenses.

The second is targeting. Macabre as it is, Cold War geography allowed a NATO nuclear strike that wouldn’t hit the USSR itself. “Now, because of the collapse of the Soviet Union and the expansion of NATO, there isn’t that middle ground,” said Sweeney. NATO commanders considering nuclear use would face the unhappy choice between striking allied countries (the Baltics), potentially neutral players (Belarus), or Russia itself, potentially triggering a wider nuclear exchange.

Given all this, why does the United States still have tactical nuclear weapons in Europe?

A big part of the answer, according to Sweeney, is inertia and alliance politics - particularly around the old idea of “nuclear burden sharing.” Early into its confrontation with the Soviet Union, the United States extended nuclear deterrence to its key allies, pledging to use nuclear weapons on their behalf if they ever were attacked.

“That is obviously us taking on a significant risk,” said Sweeney. “And during the Cold War, there were always debates about how valid those guarantees were.” A common question was whether the United States was ready “to trade New York for Paris.”

In an effort to shore up those doubts, the United States and NATO implemented a system in which non-US NATO countries “take on a part of the burden of supporting that nuclear deterrent, both by hosting these weapons and maintaining the forces to deliver them” in an effort to “bind the two sides of the Atlantic together.”

But now this arrangement faces a new threat: demographics. “As America ages, there are fewer and fewer people with direct memories of the Cold War,” explained Sweeney. “I don’t know that Zoomers and Millennials have an inherent connection to NATO in the way people who grew up during the Cold War did.” Without that bond, he warned, it’ll be harder to convince Americans to go to war over places like the Baltics - especially one that threatens to go nuclear.

“So, if NATO wants to keep the US in, it’s not nuclear weapons that are going to do it,” he said. “It’s NATO showing that they can spend the money to create conventional capabilities with which they can deter Russia.”

“If the fallback option is always going to be US nuclear weapons, that is ultimately going to doom NATO in the years ahead.”

The entire interview with Defense Priorities’ Mike Sweeney is available here on Press the Button.