Why Donald Trump Can't Pull U.S. Forces Out of Afghanistan 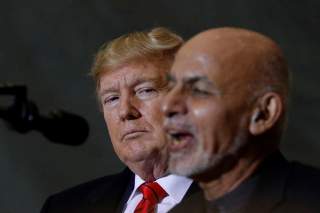 Ten years ago, Barack Obama gave one of the most important foreign policy speeches of his presidency. In a commencement address to cadets at West Point, the President announced a surge of 30,000 additional troops into the Afghan warzone, coupled with a commitment to begin withdrawing U.S. forces after 18 months. It was a bold policy announcement, meant to accomplish two things: (1) satisfy foreign and domestic audiences that the new president was serious about tackling threats to U.S. national security, and (2) give Americans confidence that the Afghan conflict (and the wider Global War on Terrorism) would not drag on indefinitely.

Obama’s surge produced some significant triumphs on the battlefield but ultimately failed to presage the beginning of the end for America’s longest war. Now in its nineteenth year, the war in Afghanistan has claimed the lives of around 2,400 U.S. service members and stubbornly refuses to yield an American victory. In a cruel twist, the United States has now lost more troops in Afghanistan since Obama laid out his timetable for withdrawal than were killed in the eight years of fighting that preceded his announcement of an exit strategy.

Responsibility for ending the Afghan war now rests with another president, Donald Trump, who has joined his predecessor in pledging to bring the conflict to a close. Indeed, Trump’s eagerness to end U.S. involvement in Afghanistan has led him to embrace pathways to peace that even Obama had not countenanced. Whereas Obama refused to pull U.S. forces out of Afghanistan before they had inflicted a decisive military defeat upon the Taliban and the al-Qaeda terrorists who had murdered nearly 3,000 innocent civilians on 9/11, Trump has been willing to negotiate directly with America’s adversaries even though they show no signs of relenting.

Yet despite his outspoken opposition to the war and his recent decision to reopen peace talks with the Taliban, there are strong reasons to believe that Trump will follow in Obama’s footsteps by failing to extricate the United States from Afghanistan. After all, it was not long into his first year in office that Trump announced an Afghan surge of his own. Trump’s surge was much smaller than Obama’s—just 3,000 additional troops, bringing the total to around 14,000—but just the fact of its implementation says volumes about the political running room that Trump enjoys when it comes to pushing for a complete withdrawal of U.S. forces.

Like Obama, Trump sent reinforcements to Afghanistan with a degree of reluctance. He complained that his instinct had been to withdraw from Afghanistan (“and historically I like to follow my instincts”) but confided that, as president, he had come to see things differently. “I heard that decisions are much different when you sit behind the desk of the Oval Office,” Trump explained.

What did Trump mean by this? Most importantly, perhaps, he was referring to the copious advice that presidents receive from their military and national security advisers, almost all of whom are telling Trump—just as they cautioned Obama—that it would be risky to reduce the U.S. military presence in Afghanistan. Leave now, the argument goes, and Afghanistan will once again become a haven for terrorists who are intent on doing harm to the United States. Needless to say, warnings like these are difficult for presidents to dismiss.

Of course, the possibility cannot be discounted that Trump will defy his national security team by ordering the complete withdrawal of U.S. forces before either a military victory or a favorable political settlement have been secured. Such a move has been suggested before. But cutting the Gordian knot in this way would leave the President open to significant risks at home and abroad.

One obstacle for Trump is that his own party strongly opposes an untimely American exit from Afghanistan. Big majorities of Republican voters believe that the war in Afghanistan has kept America safer from terrorism, and the GOP-controlled Senate voted in January of this year to caution the administration against leaving Afghanistan without first defeating al-Qaeda, ISIS, and other terrorist organizations. If national security hawks such as Jim Risch (R-ID) and Lindsay Graham (R-SC) had their way, the United States would follow Max Boot’s prescription of staying in Afghanistan without any concern for the duration of its stay.

It might be countered that opinion polls show some support for ending the war, and that President Trump would be rewarded at the ballot box if he pushed the Republican establishment aside and simply gave the American people what they want. But this would put Trump at the mercy of what the political scientist V.O. Key called “latent” (future) public opinion. What will the electorate think once the Taliban is back in Kabul, Afghanistan is governed as a theocratic state, and terrorist training camps can once again operate with impunity? At the very least, voters might not look favorably upon a president who simply declared victory and left.

In September of this year, Trump reportedly came close to a peace agreement that would have ended U.S. involvement in Afghanistan. The plan had been for Trump to host the Taliban at Camp David and personally seal the deal himself, which suggests that the President still views some political advantage in styling himself as a peacemaker. Those talks were abruptly suspended, however, after the Taliban launched a fatal attack on U.S. soldiers. Domestic critics castigated the President for considering Camp David as a suitable location to host the Taliban and for pursuing a peace deal without including Afghan President Ashraf Ghani as part of the process.

Now talks with the Taliban have restarted, with the stated purpose of finding a political settlement that will allow all U.S. troops to leave the country. Trump hopes that a diplomatic victory will give him the political cover necessary for a military withdrawal. But he will have to tread carefully. If talks go awry, the President’s critics will waste no time painting him as naïve and weak on national security. If a peace agreement is forthcoming, however, he could be accused of doing a deal with the Devil and disrespecting the lives of America’s fallen. And then there is the risk that a withdrawal will be implemented but must be reversed in the face of deteriorating security conditions.

It is worth emphasizing that Trump is not a prisoner of domestic politics. He governs in vastly different circumstances to his predecessor and, as president, enjoys enormous power to shape the conversation on national security. America’s war in Afghanistan does not have to continue. It is possible to imagine it ending. Trump can make it happen.

At the same time, though, the risks of ordering a military disengagement remain high. For this reason, it is prudent to temper expectations of a U.S. withdrawal any time soon. As much as he might chafe at the idea, Trump might well come to view staying the course in Afghanistan as the least bad option from a political standpoint—at least when compared to a peace deal with the Taliban. It would be a tragedy, of course, but one that Americans are well used to living through by now.