Why Donald Trump Needs a Realist Secretary of Defense 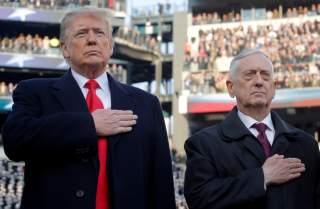 Secretary of Defense James Mattis is a good man and a patriot who has served his country with distinction. President Trump was right, however, in asking for his resignation because Mattis represents the Washington foreign-policy establishment that has mindlessly kept the U.S. military involved in unnecessary wars across the globe.

President Donald Trump ran on a realist platform, decrying “stupid wars,” and vowing that there would be “no more nation building.” Classic thinking in Washington’s swamp, however, holds to the demonstrably false premise that the application or threat of force is necessary to keep us safe; occupying foreign lands with U.S. combat troops is almost the default position of the foreign policy’s elite group-think. One of the problems from which Mattis—and other establishment-thinkers suffer—is a disconnect from how a majority of Americans think.

On September 30, 2016, near the end of the campaign, Chris Matthews on MSNBC’s “Morning Joe” explained why people were supporting Trump despite “all his flaws.”

The Washington elite, he said, don’t understand the “patriotic feelings people have” who “feel like the country has been let down. Our elite leaders on issues like immigration, they don't regulate any immigration it seems. They don't regulate trade to our advantage,” and most pointedly, “They take us into stupid wars. Their kids don’t fight, but our kids do.” A poll conducted on the seventeenth anniversary of the Afghan war shows that these sentiments have only increased.

A Charles Koch and RealClearPolitics poll found that “51 percent of respondents say that it either is time to decrease Afghanistan troop levels or to remove all troops from the country in the next 12 months.” Trump either has the same inclinations, or he’s acutely aware that his base does not want our troops in in Afghanistan. Trump has always intended to get out of Afghanistan.

As late as 2013, Trump tweeted, “We should leave Afghanistan immediately. No more wasted lives. If we have to go back in, we go in hard & quick. Rebuild the U.S. first.”

Yet in August 2017, he announced that he was not going to withdraw, but instead expand the number of troops. In explaining the turn-around, Trump said, “My original instinct was to pull out, and historically I like following my instincts, but all of my life I heard that decisions are much different when you sit behind the desk in the Oval Office.” Was Mattis a key reason for the reversal?

According to reports, Mattis told Trump that if he withdrew from Afghanistan, then what “happened in Iraq under President Obama with the emergence of ISIS will happen under you, Mattis told Trump, in one of his sharpest declarations.”

Following Mattis’ declaration, the president replied in disgust, “You all are telling me that I have to do this,” and “I guess that’s fine and we’ll do it, but I still think you’re wrong. I don’t know what this is for. It hasn’t gotten us anything. We’ve spent trillions.” A similar dynamic occurred when Trump wanted to get out of Syria in April of this year, telling a rally in Ohio that he was going to get out of Syria “very soon.”

Later that same month, however, Mattis contradicted his commander-in-chief and said, “We do not want to simply pull out before the diplomats have won the peace.” Trump again submitted to Mattis’ advice and no move to withdraw troops happened.

But it appears Trump’s frustration with his senior military advisors constantly pushing back on his instincts reached a climax, and Trump ordered the withdrawal from Syria. Mattis’ resignation was the logical next step.

The president’s instincts on withdrawing from both Syria and Afghanistan were right from the beginning, but his most senior aides talked him out of following through with those instincts. The person he next selects for the role of Secretary of Defense needs to share his realist beliefs. This person must also be someone who knows how to navigate Washington, understands issues of war and peace, and is a strong leader.

Trump is right: things do indeed look different when one sits in the Oval Office. But he was elected to that position because his instincts matched those of large segments of the American population, and it is right for him to turn his campaign promises into reality once in office. He needs senior advisors who are going to effectively implement those sound policies, not thwart them.