Why Hasn't the UN Led the Fight Against COVID-19? 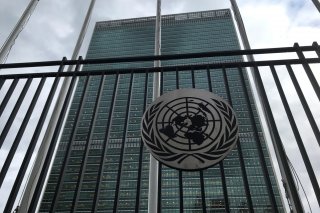 COVID-19 is an international scourge of misery, pain, and trauma. The pandemic has infected more than 1.4 million people and claimed the lives of at least 89,000 across 177 countries that we know of. The disease is the very definition of a global problem: it doesn’t respect borders, spreads on human contact, and turns airplanes, trains, and automobiles into carriers of the contagion.

Yet despite the speed with which the coronavirus has leveled the world economy and shuttered some of its largest cities for weeks on end, the United Nations—the organization created in 1945 to prevent a third world war and facilitate international solutions to international problems—is twiddling its thumbs. The World Health Organization may be the global agency now in the Trump administration’s crosshairs, but the truth is that the entire UN system has demonstrated a distressing incapacity to manage an issue that has impacted the entire planet.

Nowhere is this incompetence felt most acutely than at the Security Council, the top UN policymaking body responsible for the "maintenance of international peace and security”—the fifteen member panel that has essentially been portraying itself as a sad joke. Due to constant political jockeying between the United States and China in the battle of international public opinion and puzzling differences over whether the coronavirus constitutes a threat to international security, the Security Council has yet to release a single resolution with some actual substance attached to it. Months went by before the Security Council even agreed to meet on the topic—and even then, it took a concerted campaign from a majority of non-permanent members to make it happen. The product of the April 9 meeting was a bland press release that was long on polemics and devoid of action.

One bright light in an otherwise dark and desolate tunnel has been Antonio Guterres, the UN Secretary General who has attempted to take advantage of the high-profile megaphone his position provides to drill a bit of sanity into leaders around the world about how serious this virus is to the health, wellbeing, and stability of the planet.

On March 23, Guterres delivered a speech to UN member states on the urgent need to consider the fight against the coronavirus as the top global priority. He issued a challenge to the world’s combatants to lay down their arms, stop fighting, and start being a part of the solution rather than a part of the problem. The global ceasefire was quickly endorsed by Pope Francis, and there are suggestions that at least some of the men with guns are sympathetic to the Secretary-General’s proposal. On April 8, the Saudi-led military coalition fighting the Houthis in Yemen announced a unilateral, two-week ceasefire to the stalemated, five-year old war in order to aid the work of humanitarian organizations trying to prevent a COVID-19 outbreak in the Arab world’s poorest country.

Guterres has also acknowledged that the coronavirus prays on the weakest and most vulnerable populations, which is why he rolled out a $2 billion initiative to get ahead of the virus before it begins to make a mark in the developing world. This was in addition to a global rescue package Guterres is campaigning for at the G-20 to the tune of trillions of dollars. The money would be used to not only resource fragile health systems incapable of managing millions of incoming patients, but cash that could also serve as a safety net for countries that may see their economies collapse under the weight of the virus.

Guterres’s willingness to be proactive has impressed UN experts. Richard Gowan, the UN Director at the International Crisis Group, believes that the Secretary General has risen to the challenge to a degree other leaders have not. Indeed, at a time when Washington and Beijing appear more interested in casting aspersions at one another in the Security Council chamber than in cooperating to address the global economic and health impact of COVID-19, Guterres is doing everything in his power to ensure governments around the world understand the gravity of the crisis. “He was arguably a bit slow to sound the alarm loudly enough in February and early March,” Gowan told me. “But from mid-March onwards he raised his game, and has made a series of quite forceful interventions on the economic impact of the pandemic and how it could create political instability.”

The problem, of course, is that Guterres can only do so much in a UN system dominated by the veto-wielding great powers of a bickering Security Council. While Secretary General may sound like an all-powerful position on the surface, Guterres’s authority is vastly constrained, both due to the nature of his job and because the UN is only as effective and productive as the desire of its members to cooperate for the common good. He is appointed at the recommendation of the Security Council and therefore answers to the big powers—two of which, the United STates and China, are at loggerheads over the very coronavirus issue Guterres is trying so hard to mitigate. He is responsible for the administration of the entire UN system as a whole, which means that he can’t afford to alienate member states to the point where they purposely neglect to pay their annual dues. He is the face of the UN and is an easy scapegoat when conflicts erupt, corruption in Turtle Bay is exposed, or wasteful spending is uncovered.

The Secretary General, in short, is quite literally a thankless task—someone with huge responsibility but little authority to wield the U.N. bureaucracy to his or her will. If Syria exposed how quickly the Security Council can transform into a paralyzed and childish debating society, COVID-19 is showing the world how powerless the Secretary General can be.

Antonio Guterres can only do so much. But for the time being, he is treating COVID-19 at his personal crusade. In Gowan’s words, “He [Guterres] is showing a far higher degree of confidence now. Perhaps he needed an immediate global crisis to come into his own as SG.”

The question still outstanding is whether the tenacity and innovation Guterres is utilizing today will achieve anything concrete. Or, alternatively, whether COVID-19 will be one more lost opportunity for a UN already bruised by its previous failures.