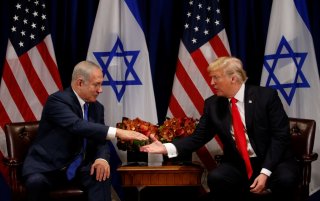 When President Donald Trump pulled the United States out of the Iran nuclear deal (formally known as the Joint Comprehensive Plan of Action or JCPOA) in 2018, he made one of the worst policy decisions in recent history. But he did not make this decision on his own.

Former Israeli prime minister Benjamin Netanyahu was ardently opposed to the deal and strongly influenced Trump’s decision-making. Now, former Israeli security officials are saying that withdrawing from the deal was the worst possible decision for both U.S. and Israeli security. Jeremy Ben-Ami,  president of J Street, joined Ploughshares Fund’s podcast Press the Button to discuss what top Israeli security experts are saying, and how we got into this mess in the first place, with co-host Tom Collina.

The Iran nuclear deal is an agreement between the United States, United Kingdom, France, China, Russia, Germany, and Iran. This deal aimed to curb Iran’s nuclear program and was successful until the Trump administration unilaterally withdrew from the deal in 2018. Now, Iran and the United States are in talks to negotiate re-entry to the deal through third parties in Vienna. However, since Trump’s 2018 withdrawal, much has changed—the United States has imposed "maximum pressure" sanctions on Iran, and Iran’s nuclear program has made significant progress.

“I think it's really important to understand that we probably wouldn't be in this mess if Benjamin Netanyahu hadn't pushed Republicans, and pushed opponents of President Obama, to adopt this as their policy,” said Ben-Ami.

When the Iran deal was first being negotiated in 2015 it was not an easy lift domestically, or internationally. Ben-Ami reflects that “one of the reasons that the deal survived [U.S.] congressional review was because of the views of the Israeli security establishment.”

Back in 2015, many Israeli experts came out in support of the deal, saying that it was the best thing for Israeli-Iranian relations. Now, many are raising the alarm bells that the US must return to the Iran deal. Ben-Ami says, “this is not a surprise.”

But it is significant.

As Israel’s former defense minister (2013-2016) Moshe Ya’alon said “Looking at the policy on Iran in the last decade, the main mistake was the withdrawal from the agreement…it gave them an excuse to go ahead [with enrichement].”

Ben-Ami explains that it is not only the former defense minister, or senior officials like a former director of Mossad, and a former head of military intelligence, speaking out but also, “the desk officers, the ones writing up the analysis that went up the chain. And their analysis was—this is a good deal…don't break it and don't push the U.S. to, to get out of it.” This demonstrates that those who really understand the deal see the value in it. Instead, the message Netanyahu and Trump sent was that they would rather prioritize short-term political gain and risk conflict than do what experts in both nations said was best for international security—stay in the deal.

Taking a step back, Ben-Ami notes: “I think one of the most fascinating things in the work that we all do for peace and for diplomacy is that some of our best validators are the folks who step out of military security and intelligence services.”

These officials are coming away from decades of experience in analysis with an understanding of these complex issues and they are concluding that “there are no military solutions to political problems. And that is the frustration of their entire career.”

As we wait for news from the talks in Vienna, it must be emphasized that diplomacy with Iran is the only reasonable path forward. There is no military solution to Iran’s nuclear program.

Ben-Ami concludes, “you can rattle the sabers all you want, and you can … run all the exercises you want. But at the end of the day, a military strike on Iran is not in the best interest, the national security interest, of the state of Israel.”

The entire interview with Jeremy Ben-Ami is available here on Press the Button. You can also learn more about the validators of the Iran nuclear deal on J Street’s website.