Why Joe Biden Should Lead a Reboot of NATO 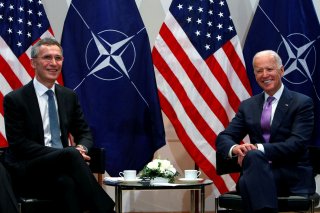 As a candidate for the Democratic Party nomination, Joe Biden wrote in an essay for Foreign Affairs that his agenda “will place the United States back at the head of the table, in a position to work with its allies and partners to mobilize collection action on global threats.” Writing about U.S. partnerships with allies and citing NATO, he said, “I will lead the effort to reimagine them for the world we face today.” But what should that mean?

NATO was originally created as a military alliance to protect western Europe from the Soviet military threat and communist expansionist ambitions. At the time, Europe was ravaged—both militarily and economically—from World War II and looked to the United States to provide economic aid and a security umbrella. A cornerstone of the alliance is the concept of collective defense enshrined in Article 5: “an armed attack against one or more of them in Europe or North America shall be considered an attack against them all.” This meant that the Soviet Union had to consider that any invasion of Europe risked direct military confrontation with the United States, including the specter of nuclear war.

But the Berlin Wall fell in 1989. The Soviet Union no longer exists. Its former Warsaw Pact allies are integrated with Europe and now part of NATO. And Russia does not pose the same threat as the former Soviet Union.

But if Russia is seen as a threat to Europe, it’s a threat the Europeans should be able to counter without having to depend on the United States as they did during the Cold War. The combined GDP of NATO’s European countries was $17.5 trillion in 2019 which was ten times larger than Russia’s ($1.7 trillion). And NATO defense spending more than four times Russia’s: $287 billion versus $65 billion. Given the financials, it’s a fair question to ask how Russia poses a threat and why Europe cannot defend against it.

This is not to say the Russian threat is benign, but it is important to be put the threat in context. And the danger Russia poses to Europe may be less from a military perspective and more from cyber attacks and mis- and disinformation campaigns meant to undermine elections and confidence in governments and institutions.

To the limited extent that Russia does pose a direct military threat, part of the problem is not how much money the Europeans spend but how they spend it. NATO has operational, materiel, and administrative standards, as well as interoperability for many of its weapon systems. But the European contingent of NATO still consists of twenty-eight separate militaries. It may be too much to ask sovereign nations to give up control of their individual militaries (although European countries have been able to do this in other areas, such as currency, via the European Union), but a reimagined NATO would be one where Europe fields a more unified and integrated joint force among its member nations. In particular, NATO needs to adopt the concept of and implement fully-networked command, control, and communications, which is critical in a digital age.

Another part of the problem is that NATO has chosen to undertake out-of-area operations that distract from its core mission—collective defense against direct military threats to Europe. Just as the forever war in Afghanistan is not critical to U.S. national security, neither is it for European security.

Even if the United States doesn’t need to provide the bulwark of Europe’s defense, that doesn’t mean the United States should abandon NATO altogether. A small military footprint is sufficient to demonstrate America’s commitment to NATO. But instead of being the front line defense for Europe—as it was during the Cold War and remains so today—the bulk of U.S. military support would be as an offshore balancer-of-last resort that is ready, able, and willing to respond with overwhelming force for Europe’s defense if needed.

President-elect Biden has told foreign leaders that “America is back.” But being back shouldn’t mean going back to the NATO pre-Trump based on an old paradigm. Instead, as president, he should lead a re-boot of NATO for the world NATO faces today.

Charles V. Peña is a senior fellow with Defense Priorities. He has more than thirty years of experience as a policy and program analyst and senior manager, supporting both the Departments of Defense and Homeland Security. Peña is the former director of defense—policy studies at the Cato Institute and author of Winning the Un—War: A New Strategy for the War on Terrorism.