Why We Must Step Back from the Brink on China 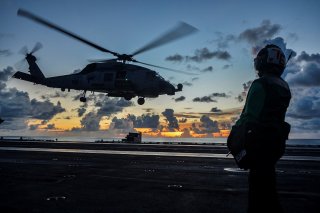 There is no denying Capitol Hill is divided against itself. But if there is one subject that brings everyone into the same tent, it is China.

Now that President Trump has been diagnosed with what he frequently characterizes as the “China virus,” this trend is likely to accelerate. COVID-19, however, is only one crisis that threatens to push Sino-U.S. relations off the cliff. Washington and Beijing both have an interest in salvaging one of the world’s most critical bilateral relationships.

Two reports, one published by the House Intelligence Committee and the other released by the GOP-led China Task Force, illustrate just how serious the U.S. foreign policy community writ-large views Beijing’s rise in the 21st century. Both documents paint China as a dangerous, malignant force whose quest for global dominance will remain unchallenged unless the United States marshals the resources to stop it.

This recommendation comes at a time when Washington and Beijing are in the midst of an escalatory cycle on everything from trade and technology to cyber-espionage and geopolitics. The U.S. and China are increasingly convinced they are on the right side of history and have an obligation to obstruct the other lest they lose an advantage. The same U.S. and Chinese officials who should be searching for off-ramps from confrontation are instead contributing to it.

Taiwan is an especially dangerous issue in the U.S.-China rivalry. The small, autonomous island has become far bolder in pushing back against Beijing’s intimidating behavior. Taipei is intent on deepening its strategic partnership with Washington, which a large majority of lawmakers on Capitol Hill are more than willing to support. The Trump administration has already sold $15 billion of military equipment to Taiwan and is preparing to sign an additional $7 billion package complete with cruise missiles, MQ-9B Reaper drones, torpedoes, and mines.

Beijing has no intention of letting these developments slide without a response. In September, the Taiwanese air force scrambled fighter planes every day for two consecutive weeks to intercept Chinese military aircraft approaching Taiwanese airspace. On the same day U.S. Undersecretary of State Keith Krach visited Taiwan, China dispatched 16 fighters and 2 bombers over the Taiwan Strait in a forceful show of displeasure.

The mutual escalation between Washington and Beijing has led respected China scholars to counsel the next U.S. President to refrain from resetting bilateral relations. Others, including President Trump, have gone even further by suggesting a complete decoupling with Beijing—a move that would hurt the U.S. economically as much as it would hurt China.

The U.S., however, doesn’t need to execute a reset with China in order to prevent the relationship from going off the rails. All it needs to do is adopt a more prudent outlook on the China challenge.

While one can understand why the U.S. foreign policy community is so concerned about Chinese activities around the world, none of these activities should be a shock to students of history. China is doing what rising powers have done since time immortal—utilize a period of extensive economic growth to modernize its military, actively search for new opportunities as they arise, and increase its overall power relative to its neighbors and competitors. China’s strategy is less about military conquest and global supremacy and more about carving out a role for itself as a world power.

The likelihood of a U.S.-China rapprochement in the near future is nonexistent. But the likelihood of a mini-detente on specific issues is well within the realm of possibility. As the U.S. learned during its 40-year strategic contest with the Soviet Union, rivalry need not automatically translate into a no-holds-barred slugfest where strong disagreements on some issues shuts down collaboration on everything else. Good statecraft means recognizing when interests align to the point where collaboration becomes possible.

There are no shortage of problems Washington and Beijing can work on together. COVID-19 has taught the entire world just how devastating a public health crisis can be if the world’s major powers allow it to run rampant. Terrorism, another transnational problem, impacts U.S. and Chinese interests. Both powers also have an interest in ensuring global markets are stable and that the bilateral trade relationship continues to run smoothly—even as the two continue to disagree over specific export and import levels.

Most importantly, both the U.S. and China have a paramount interest in avoiding a military accident that in the heat of the moment could mushroom into outright conflict. Needless to say, a clash between the world’s two largest defense spenders and economic powers—and all the human, economic, and material damage such a conflict would produce—is a dreadful scenario both powers should do their utmost to prevent. This will require level-heads on both sides, bold leadership at the top, and diplomats actually willing to listen rather than lecture.

Being tough on China is now a fad in the Beltway. But to squeeze U.S. policy on China into a one-size-fits-all mold is an emotional reaction—one that could negatively define U.S.-China relations for decades to come.