Why the West Should Care About the Turmoil in Armenia 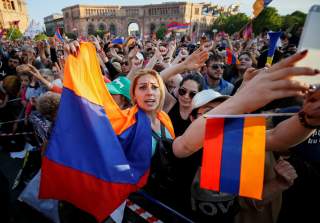 National Security Advisor John Bolton is planning to visit the South Caucasus, a strategic mountainous region sandwiched between Russia, Turkey and Iran, which changed hands repeatedly between these imperial masters for the last one thousand years.

In Georgia, he will deal with a pro-western country still reeling from the war with Russia ten years ago. But a real challenge awaits Bolton in Armenia—a small mountainous country with a population of just under three million people.

Armenia is in a political meltdown. Prime Minister Nikol Pashinyan, who was swept into power in May, declared early elections and resigned on October 16. He will, however, continue on as acting prime minister, which essentially means that he will not be relinquishing any power.

Armenia is critical to European and American interests. Bordering Turkey to the west and Iran to the south, with only Georgia separating it from Russia and the Black Sea, Christian Armenia stood out for centuries as a strategically sensitive crossroads for jostling empires. Today, Yerevan, a historical Russian ally, also tried to keep good connections with the European Union.

One of the prime indicators of a true democracy is the peaceful transition of power from one administration to the next. However, rather than graciously accepting the responsibility of his office, Pashinyan is using his power to come perilously close to mob rule and permanently destroying his political opposition.

He is using law enforcement to do away with his political foes. The first to face charges was former President Robert Kocharyan. The charges filed this summer concern the 2008 transition of power when Kocharyan left office after an open election that was approved by the Council of Europe.

Back then, elements of the opposition rioted over the Kocharyan’s victory. In response, Kocharyan imposed martial law for twenty days, which resulted in ten deaths, including among the police. His actions were investigated and found by the European Union to be merited.

Now, ten years after numerous national and international bodies have ruled in Kocharyan’s favor, Pashinyan, who harbors a personal grudge, is claiming the constitution was violated. To turn the people against Kocharyan, Pashinyan is using the Armenian media, security, and law enforcement apparatus to conduct a scorched earth campaign against the former president.

The smoking gun is the recently leaked voice recording of a conversation between the chief of National Security Service (NSS) Artur Vanetsyan and the chief of the Special Investigative Service (SIS) Sasun Khachatryan. This compromised conversation concerned the "Kocharyan Dossier," which exposed the abuse of power and total disregard for the rule of law by the top leaders of the Pashinyan circle.

On July 26, acting on behalf of Pashinyan, the SIS arrested former President Kocharyan. On August 13, the Court of Cassation released Kocharyan. The SIS is appealing this decision because it wants to immediately re-arrest Kocharyan and obtain a fifteen-year criminal sentence.

This problem, however, goes deeper than Kocharyan’s arrest. If he is allowed get away with this miscarriage of justice, then Pashinyan will consolidate his power in the December elections, as his My Way alliance is at the peak of popularity.

He is likely to continue until all actual and potential political opponents are destroyed. The adage is being proven true: "Power corrupts, absolute power corrupts absolutely." The first step in obtaining absolute power is decapitation of the opposition.

Instead, Pashinyan should be following the guidance of President Harry Truman who stated, “All power is temporary, leave it in the best condition possible.” But Pashinyan is no Truman. Unless he is brought into line by the great powers, he will continue to destroy his enemies.

This is something Bolton should keep in mind: The integrity of the Armenian government and its judicial system is at risk. The Human Rights Watch provided a very accurate assessment of this situation, stating that “resolving the issue of politically motivated prosecutions will be challenging, but very important to restore faith in Armenia’s criminal justice.”

The hypocrisy of Pashinyan was revealed during his remarks before the Carnegie Europe Research Center on July 11, when he said, “We have overcome our own fears and carried out a revolution of love and tolerance by eliminating the self-reproduced power, telling ourselves and the world that we will never allow for one person to make decisions on behalf of all of us.”

As a member of the Council of Europe, Armenia is subject to the European Council of Human Rights. The European Union needs to realize that Pashinyan's actions speak louder than his words. Those actions are already in violation of human rights in Armenia and may lead to a surge of nationalism and hostilities with Armenia's neighbors.

Left unchecked, Pashinyan may undermine democracy in Armenia and further destabilize the Caucasus region. There is too much at stake for the European Union and the United States to remain silent and trust Pashinyan’s words.

If international pressure is not brought upon Pashinyan, then he will continue to consolidate power, and, in so doing, undermine everything that has thus far been achieved in Armenia. The West should act now.

Colonel (Retired) Wes Martin, U.S. Army Military Police has served in law-enforcement positions around the world and holds an MBA in International Politics and Business.