Will John Bolton Go to War Against Donald Trump? 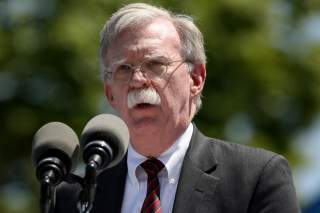 Ambassador John Bolton’s career reached its apotheosis this week as he was unceremoniously sacked—or forced to resign—by the president he served for a year-and-a-half. Trump all but called him a bonehead in his tweet dismissing him. Now the two may become enmeshed in a public feud.

It was a long time coming.

The National Interest first reported that Bolton was closing in on the job in early 2018—to the surprise of then-National Security Advisor (NSA) H.R. McMaster and his aides. Trump finally made the move in April 2018, the zenith of an uneven political career for Bolton, who failed to hold onto his job as U.N. ambassador under George W. Bush and was always a controversial figure, even in Republican circles. A protege of former Secretary of State James Baker, he became legendary for his sharp bureaucratic elbows and also played a key role in ensuring that George W. Bush was elected in 2000 during the protracted battle over the Florida election returns.

From the beginning, however, policy fissures between Bolton, an inveterate uber hawk, and Trump, who had criticized the Bush legacy in the most caustic of terms, were obvious. Fox journalist and Trump consigliere Tucker Carlson nearly sundered Bolton’s comeback—forcing Bolton to admit that he did not regret the Iraq War on live television—a major break with the president.

When Bolton finally was installed, a crisis in Syria swiftly followed: a fresh chemical attack perpetrated by the regime of strongman Bashar al-Assad. Trump responded with the pinprick retaliation backed by then-Defense chief James N. Mattis but Bolton favored a more radical response.

Similar discrepancies pervaded the rest of Bolton’s tenure. Bolton looked to be riding high in May 2018 when the president nullified the Obama-inked Iran nuclear accord, but Trump never showed the zeal for regime change his third national security advisor did. In June, Bolton favored a ferocious response to the downing of an American drone by the Iranians, but at the last minute, Trump nixed a strike on the mullahs of Tehran that would likely have triggered a wider war in the Middle East. Bolton was sullen, the latest in a series of policy humiliations, from Trump’s glad-handing with North Korea’s Kim Jong-un to the administration-championed peace process in Afghanistan.

Bolton seemed to have secured his latest victory over the weekend, ensuring the scuttling of a Camp David summit with the Taliban. But the win turned out to be a poisoned chalice, as Trump wearied of him.

First, will Bolton go to war with a president rapturously popular with the Republican base and on the Fox News circuit, of which Bolton is an alumnus, or will he go quietly into that good night? Aides that have run afoul of Trump—former Secretary of State Rex Tillerson, Mattis, and former Attorney General Jeff Sessions—have refused to divulge embarrassing information about the forty-fifth president, even after leaving their posts. Bolton may be different. He relishes going to battle in forums like National Review, which has been praising him, and the Wall Street Journal, which has not hesitated to take issue with a variety of Trump policies. In return, Trump would be sure to deride him as a quintessential Washington blatherskite.

Second, who stands to succeed Bolton? As of Wednesday, it’s a wide open race.

The favorite, after not being at all on the map for the job until recently, is likely Richard “Ric” Grenell, the pugnacious ambassador to Germany and administration “pointman on Europe” whom I profiled for The National Interest last year. To some, Grenell is a curious choice, as he’s a Bolton protege, having served as spox at UN during Bolton’s fiery Bush administration tenure. But Grenell is mobbed up with the right people, namely the president’s son, Donald Trump, Jr., and a coterie of powerful outside advisors to the White House. Further, the president regards Grenell as telegenic and loyal.

But gaining steam is Ret. Col. Douglas Macgregor, a foreign policy realist and exuberant Trumpist. Macgregor is an ally of Carlson and a frequent guest on his program, the preeminent show on Fox. Last night, Macgregor appeared on Carlson’s show and essentially auditioned for the job, delivering a fiery critique of the Bolton view of the world. Macgregor called for the unilateral withdrawal of American forces from Afghanistan and Syria, arguing that the local powers can reach agreements that an American presence merely impedes. In addition, he called for Trump to sign on to an “end of war declaration” with North Korea. A Macgregor-led NSC would adhere to Trump’s original America First vision in every way possible, including an outreach to Russia. Chief of Staff Mick Mulvaney is a foreign policy realist and libertarian warm to Macgregor. A Mulvaney aide who warred with Ambassador Bolton, Rob Blair, is also in play.

From there, the race breaks truly wide open. The runners-up to Bolton in 2018, Keith Kellogg, the former NSC chief of staff, and Stephen Biegun, the Korea envoy, are getting second looks. Perhaps most curious: Frederick H. Fleitz, another former NSC chief of staff, to Bolton no less, is a purported candidate. K.T. McFarland, the former deputy to NSA Michael Flynn, was a ubiquitous presence on Fox Tuesday following Bolton’s firing; the Trump administration continues to hurt for women in its senior ranks. And it would shock no one to see Ricky Waddell, another former deputy NSA, or Gen. Jack Keane, ret., or even the controversial Iran aide Brian Hook get the nod. Tucker Carlson denounced Hook last night on his show as an “unapologetic neocon” who has “undisguised contempt for Donald Trump.”

Curt Mills is a foreign affairs columnist at The National Interest, where he covers the State Department, National Security Council and the Trump Presidency.