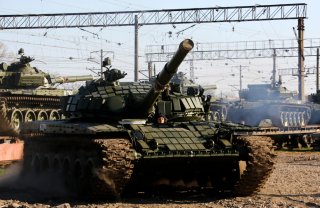 The tense security environment in Ukraine is escalating as Russia deployed nearly 100,000 troops to the border and U.S. Secretary of State Antony Blinken met with NATO allies and Russian leaders in Europe. The main question on everyone’s mind is: what is Russian president Vladimir Putin thinking?

We cannot just assume that Putin is bluffing by mobilizing troops on the border as Russia pulled a similar play in 2014 which resulted in the invasion and annexation of Crimea.

But will Putin invade again? “Maybe Mr. Putin has not decided. This is somebody who likes to have options. My guess is that the ideal outcome from the point of view of the Kremlin would be to get concessions from Ukraine or the West without having to use military force,” Pifer said. It is important, then, that the West does everything in its power to convey to Russia that if it does invade Ukraine, there would be very real consequences. But what kind?

Since Ukraine is not a member of NATO, it does not have the Article Five guarantee—an attack against one member is considered an attack against all members; without said guarantee, there must be clear and direct communication of the costs Russia would pay if it invades Ukraine.

The first cost, Pifer explains, would be greater political isolation of Moscow. The Russians have expressed interest in further talks between presidents Putin and Biden. If Russia were to invade Ukraine, this would be completely off the table and other Western Nations would follow suit. If this were to occur, Pifer predicts, “there would be replications of that kind of move to isolate Russia elsewhere in the world.”

Cost number two would be the increase in NATO’s defense and deterrence capabilities. We saw this in 2014 when NATO countries raised their defense budgets after Russia seized Crimea and provoked conflict in Donbas. “NATO today is spending tens of billions of dollars more per year than it was six years ago. If there is a major Russian invasion in Ukraine—I think you’ll see those numbers go even up,” Pifer states.

The third cost would be economic sanctions against Russia. There are reports that the United States and the European Union have already discussed sanction options. Pifer argues that it can be taken a step further. To further convey to Russia that the costs would outweigh any perceived benefits of invading Ukraine, Pifer tells listeners, “I think it would be useful for Washington and Brussels to come up with an agreed set of sanctions and then convey that privately to the Russians.”

And the fourth cost would be the damage suffered from the Ukrainian military which is much larger currently than it was back in 2014. If Russia were to invade Ukraine, there is a higher likelihood of Russian military casualties. Pifer asks, “How do Russian soldiers coming home in body bags who are fighting and killing Ukrainians—Putin describes Ukrainians as we’re all one people—how does that play with the Russian domestic audience?” He adds that the Russian government went to great lengths in 2014 and 2015 to hide the fact that Russian soldiers died in Ukraine.

These costs would be painful for Russia if the Kremlin decides to invade Ukraine, which leads Pifer, and others, to question President Putin’s intentions toward Ukraine and whether his decision to invade is driven by the notion of legacy: “Putin’s now 69 years old, he’s thinking about his legacy. How does he sort of assure himself a place in history as a great Russian leader?” Pifer asks. “Well typically, if you look at Russian history, it’s been leaders who’ve added more land to Russia.”

Bringing Ukraine “back to Russia” would be difficult as Ukraine’s military capabilities have grown and the Russian attempt to bring Ukraine closer has only pushed it further towards the West. Pifer adds that polls before 2014 show that less than 30 percent of the Ukrainian population wanted to join NATO. Recent polls show a majority of Ukrainians–over 50 percent–want to join NATO.

“That illustrates how badly Russian policy towards Ukraine has been the last seven years—it’s been a huge strategic failure,” Pifer says. “It’s not succeeded in bringing Ukrainians closer to Russia. It has pushed Ukraine away.” Ukrainian president Volodymyr Zelensky, who previously was more ambiguous about his positions towards Ukraine joining NATO, now has expressed that “the only way that Ukraine can be truly secure is embedded in NATO,” Pifer adds.

The United States and the West must make it clear to Ukraine how much support they are prepared to provide. They also must communicate to Russia that there will be painful and real consequences if it were to invade Ukraine. Under these conditions, effective diplomacy may be able to prevent a disastrous war.

Angela Kellett is the Roger L. Hale Fellow at Ploughshares Fund, a global security foundation. Her work focuses on nuclear policy and conflicts in the Middle East. You can follow her on Twitter @angiekellett.