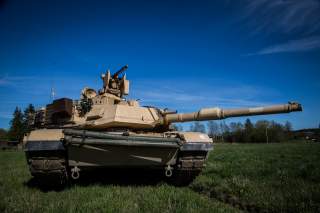 Beef up U.S. armored and attack helicopter forces in Poland and use Denmark as a U.S. Navy base to deter Russia.

Those are some of the recommendations of a new report that urges stiffening of U.S. and NATO forces in Poland and the Baltic States.

But will more troops in Eastern Europe really deter a Russian attack? The U.S. already has a Brigade Combat Team in Poland housed in temporary bases, while NATO deployed four 1,200-man battlegroups, one each in the three Baltic States and Poland.

No one is under any illusions that a few thousand soldiers will stop a move on Poland and the Baltics by the Russian military, which will enjoy the luxury of operating from home bases along the border. But just like American troops in West Germany during the Cold War, Western forces in Eastern Europe are a trip wire that will force the Kremlin to consider: Is seizing territory worth the risk of killing NATO troops and risking a wider war with the West?

Yet the Atlantic Council study, written by retired U.S. Air Force general Philip Breedlove and U.S. diplomat and former NATO deputy secretary general Alexander Vershbow, argues that the trip wire needs to be stronger. “While the NATO battle groups and the US rotational brigade combat team both have warfighting capabilities, they lack a compre­hensive and coordinated battle plan between NATO and the United States, as well as adequate enablers—including intelligence, surveillance, and reconnais­sance assets; air and missile defense; and long-range fires,” Breedlove and Vershbow write. “A determined Russian conventional attack, espe­cially if mounted with little warning, could defeat these forward-deployed NATO and US forces in a relatively short period of time, before reinforcements could be brought to bear.”

Western planners worry that Russia could quickly seize Polish or Baltic States territory before NATO could respond, thus putting the burden on NATO to decide whether to dislodge the Russians and thus escalate hostilities. In 2018, NATO adopted the "Four 30s” plan, in which 30 ground battalions, 30 air squadrons and 30 warships would reinforce Eastern Europe in 30 days.

But that’s not enough, say Breedlove and Vershbow. They recommend reinforcing the U.S. presence, and mainly in Poland, which would serve as a staging base to support the Baltic States. and turning temporary installations there into permanent bases. A division headquarters would also be set up in the Polish city of Poznan to facilitate the flow of American reinforcements into Poland and the Baltics in the event of war.

Additional measures would include strengthening the existing American brigade in Poland, stationing an armored brigade in Germany, expanding U.S. special operations forces in the region, and using Denmark as a home port for U.S. destroyers that would conduct “continu­ous patrols in the Baltic Sea and port visits to allied ports in the region.”

Significantly, given the Trump administration’s claim that America’s NATO allies aren’t paying their fair share of the defense burden, the report makes clear that Eastern Europe would be expected pay for a larger U.S. presence. While Poland has already promised to pony up $2 billion, “the overall cost of the required construction, however, is likely to exceed $2 billion,” the report notes.

These ideas have merit: too few boots on the ground are more likely to generate contempt than deterrence. Still, if one U.S. brigade in Poland isn’t enough to deter Moscow, would a few more battalions and a couple of destroyers make a difference? It seems just as likely that the prospect of engaging in combat with American troops will serve as a deterrent—or it won’t.