Would President Trump Travel to Syria to Meet Assad? 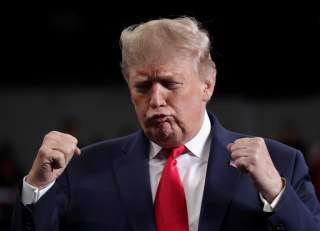 During a visit to the Orthodox Church of the Virgin Mary in Damascus last week alongside Syrian dictator Bashar al-Assad, Russian President Vladimir Putin posed an idea to the man he saved: why don’t you invite President Donald Trump to the presidential palace? U.S.-Syrian relations, Putin said, could be resurrected from their horrible state. When Assad joked to the Russian president that he was ready to extend the invitation, Putin smiled and replied, “I will tell him.”

This anecdote, reported by Ehud Barak of Israel’s Channel 13 news, maybe a laughable story that hasn’t gotten much attention in Washington. Most people in town don’t see a Trump visit to Damascus happening at all. The outcry would be fierce, with even the Trump-dominated Republican Party calling the prospective visit a stain on America’s moral character. Trump, too, doesn’t have much incentive to even countenance a trip; Assad’s prosecution of the 9-year war has shown that there are no deals in Syria to be had because the regime isn’t interested in one.

But one can’t help wonder if Trump would consider it. Who after all could have predicted in the summer of 2017, when Washington and Pyongyang were at each other’s throats and threatening one another with mutual destruction, that Trump and North Korean leader Kim Jong-un would shake hands and stroll in the garden together a year later?

The answer, of course, was nobody.  Which makes a potential Trump-Assad meeting perhaps more than a theoretical exercise.

Trump is a lot of things. During his three years in the Oval Office, he has been unpresidential to the hilt, said things he shouldn’t have, views briefing books with as much interest as a middle-schooler in math class, makes decisions on-the-fly (sometimes with little warning), and is easily persuaded by generals with shiny medals on their chests. One of the most interesting qualities about Trump, however, is that he is all about making the big transaction. If the president had his choice, he would likely dispense with the moral qualms and talk with anybody who called him up or sent him a message.

Sitting down with Kim Jong-un is the most visible example of Trump’s obsession with the big deal. But there are others as well. On Iran, the president may talk tough about bankrupting the country, but he has also reached out to the Iranians for direct negotiations. Mahmoud Vaezi, Iranian President Hassan Rouhani’s chief of staff, told a 2018 cabinet meeting that Trump tried to arrange a discussion with Tehran eight times. While the number wasn’t confirmed, it wouldn’t be out of the ordinary for a man who markets himself as the world’s best negotiator. Trump wanted to meet with Rouhani during last year’s U.N. General Assembly as well, an offer the Iranian president spurned in part due to the optics back in Tehran.

Nicolas Maduro may be a pariah in Washington, Europe, and much of the Western Hemisphere, but that hasn’t stopped Trump from envisioning some kind of dialogue with him. Yes, the Trump administration’s policy with Venezuela is regime change—i.e. starving Maduro’s government of the resources it needs to keep control and tossing diplomatic support over to Juan Guaido. But if regime change can be done diplomatically, so much the better. Trump left open the prospect of a face-to-face with Maduro on the sidelines of the 2018 U.N. General Assembly. Again, the session never happened. But the fact Trump was willing to take Maduro's temperature personally confirmed in many people’s minds that he has no scruples with talking to people his own national security advisers view as surrogates of evil.

If Trump was willing to invite Taliban officials to the presidential retreat at Camp David last September to sign an agreement, who wouldn’t he converse with?

We shouldn’t expect a Trump voyage to Damascus any more than we should expect 90-degree weather in January. The 2017 and 2018 chemical weapons attacks perpetrated by the Assad regime have appeared to destroy the Syrian dictator’s credibility in Trump’s eyes. He even wanted to assassinate Assad in 2017 in retaliation for the sarin gas attack in the Damascus suburbs, which killed dozens of children.

But it’s not crazy to picture the U.S. and Syrian presidents sitting next to each other with cameras clicking away. Such a moment—controversial, historic, newsworthy—would be right in Trump’s alley.