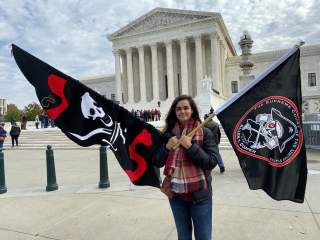 The case, arising from the discovery of Blackbeard’s famed pirate ship, asks whether an underwater production company can sue North Carolina for distributing its copyrighted images of the wreck. Several justices appeared troubled by the possible consequences.

“What the state decides to do with its own website, charging $5 or something, is to run Rocky, Marvel, whatever, Spider-Man, and perhaps Groundhog Day,” Justice Stephen Breyer asked North Carolina lawyer Ryan Park. “Several billion dollars flows into the treasury. Now, if you win, why won’t that happen?”

The pirate Edward Teach, better known as Blackbeard, seized a French vessel near the Lesser Antilles in 1717 and rechristened it Queen Anne’s Revenge. Refitted with 40 guns, Queen Anne’s Revenge was the flagship of Blackbeard’s armada until it ran aground near Beaufort, North Carolina, in 1718. A private salvage company located the wreck over two centuries later in 1996.

The firm retained Nautilus Productions to document their recovery activities. Nautilus and its owner, Frederick Allen, copyrighted video and still images of the ship. Thereafter, the North Carolina Department of Natural and Cultural Resources displayed several copyrighted images of the wreck on its website, prompting the lawsuit now before the high court.

“After Nautilus spent nearly two decades creating works by photographing and filming (at considerable risk) underwater excavation of Blackbeard’s famed Queen Anne’s Revenge, the state brazenly pirated them,” the company wrote in its petition to the justices.

North Carolina says those claims should be dismissed, since the 11th Amendment broadly immunizes states from lawsuits. Allen counters that Congress authorized copyright infringement lawsuits against states when it adopted the Copyright Remedy Clarification Act (CRCA) in 1990. The legal question before the court is whether Congress properly did away with (or “abrogated”) state sovereign immunity from copyright claims.

Allen urged the court to follow a similar course in his case, citing a constitutional provision directing Congress “to promote the progress of science and useful arts” with patents and copyrights. The 4th U.S. Circuit Court of Appeals found for the state.

“The intellectual property clause, is unique within [the Constitution] in laying down an express constitutional mandate for Congress to protect specified private property rights against any and all intrusion,” Allen lawyer Derek Shaffer told the justices.

North Carolina counters that the court has already said Congress can’t use the intellectual property clause to limit state immunity. But that argument didn’t seem to hold water with the justices.

“There’s something unseemly about a state saying, yes, we can hold copyrights and we can hold infringers to account to us, but we can infringe to our heart’s content and be immune from any compensatory damages,” Justice Ruth Bader Ginsburg said.