Taiwan Tried to Warn the World On Coronavirus. No One Was Listening 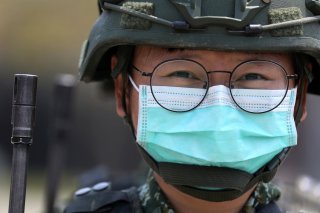 As health care professionals struggle to fight severe acute respiratory syndrome coronavirus 2 (SARS-CoV-2) and the disease it causes (COVID-19), which has infected over 2 million worldwide and killed over 140,000,  the Trump administration has now stepped up several initiatives in a hope to stem the proliferation of the deadly virus.

One such initiative includes the sharing of information among countries battling the coronavirus. To that end, U.S. deputy secretary of state Steve Biegun initiated a video conference on March 21 among members of the Quadrilateral Security Dialogue (the Quad), which was initiated in 2007 by Japanese prime minister Shinzo Abe in response to the growing economic and military might of China. The latest gathering of the Quad (Australia, India, Japan, and the United States) included New Zealand, South Korea, and Vietnam to help address the new challenges brought by the coronavirus. Representatives of these seven Indo-Pacific nations (Quad-Plus) agreed to meet weekly to discuss “vaccine development, challenges of stranded citizens, assistance to countries in need and mitigating the impact on the global economy.”

Among the invitees, Japan, South Korea, and Vietnam have all been lauded in international media for their efforts to control the spread of the virus, yet another nation that has won international praise for its successful efforts appears to have been left off the guest list, Taiwan.

With an aged and dense population within proximity (80 miles) to China, along with extensive cross-strait exchanges, Taiwan was expected to have the second-highest number of cases of COVID-19, especially since the outbreak coincided with increased travel for Lunar New Year celebrations. China has also long been the number one destination for Taiwanese seeking work overseas, with some 400,000 Taiwanese working in China, Hong Kong, and Macau. Some 2.7 million Chinese traveled to Taiwan from China in 2019, despite Beijing imposing restrictions on individual travel around mid-year.

After Beijing first brought the novel virus to the attention of the World Health Organization (WHO) on December 31, Taiwan immediately started checking inbound passengers from Wuhan for fever or other symptoms. Taipei sent a team of health experts on a fact-finding mission to China in mid-January, and on January 26 became the first country to ban flights from Wuhan, sending Chinese tour groups in Taiwan home early.

Since the onset of the outbreak, and in what two authors refer to as “the world’s best response to the pandemic,” Taipei has implemented over a hundred action items, holding daily press briefings, educating the public on how to avoid contracting the virus, implementing online face mask rationing, and testing temperatures at airports, schools, subway stations, restaurants, libraries, and gyms. While Taiwan has not conducted widespread testing like South Korea, Taipei was quick to introduce quarantine centers and contact tracing and has imposed fines of up to $33,000 each on close to 300 people for skipping quarantine—which is strictly monitored by cellphone tracking and neighborhood wardens.

Of course, as we have witnessed in other countries fighting COVID-19, the quality of health care matters. Taiwanese benefit from a robust single-payer health care system which was recently ranked No. 1 in the world for the second year in a row, according to the Health Care Index by Country released by Numbeo, an online database. Taipei also has a history of dealing with viruses, notably the outbreak of SARS in 2003 (when seventy-three died), which led to the establishment of the Central Epidemic Command Center (CECC) one year later. Perhaps this is why Taiwan has the most critical care beds per 100,000 population than any other Asian state.

Given its long experience, Taipei set up its #TaiwanCanHelp health outreach program and has received calls from several nations asking for advice on how to handle the COVID-19 outbreak.

Currently, the number of confirmed cases in Taiwan has been held to under 379 with five deaths. The majority of Taiwanese appear satisfied with their government’s response, as President Tsai Ing-wen has a convincing 75.7 percent approval rating for her handling of the outbreak. Of course, it is still too early to predict outcomes, and the number of confirmed cases and deaths could continue to rise in Taiwan, especially as many Taiwanese are returning home from overseas.

Given widespread recognition of Taiwan as a leader in controlling the outbreak of COVID-19 to date, one wonders why Taiwan was not considered to participate in the video conference of last week. Oftentimes, when Taiwan is excluded from multinational institutions and fora, the blame is usually traced back to China, which Beijing considers part of its territory despite the People’s Republic of China (PRC) having never ruled the island.

Beijing has barred Taiwan’s participation at WHO’s World Health Assembly ever since Taiwan’s status-quo minded president Tsai Ing-wen of the independence-leaning Democratic Progressive Party (DPP) refused to accept the “One-China” principle after winning the election in 2016.

But China is not a member of the Quad, and lately, the Trump administration has shown no signs of being deferential to Beijing’s interests—singing into law on March 26 the Taiwan Allies International Protection and Enhancement Initiative (TAIPEI) Act, which references “Taiwan’s unique relationship with the United States, Australia, India, Japan, [the Quad] and other countries are of significant benefit in strengthening Taiwan’s economy and preserving its international space.” The Act also demands the U.S. government advocate for Taiwan’s membership or observer status in such international organizations as the WHO, which the U.S. State Department did on April 3.

Certainly, as one of the most praised nations in controlling the spread of this novel coronavirus, there is no moral reason why Taipei should be excluded from contributing its knowledge of the best practices needed to fight the COVID-19 pandemic. Taiwan warned WHO over the possibility of human-to-human transmission in the virus outbreak in Wuhan back in late December. Perhaps if Taiwan was a member of the WHO, its warning would have been heeded. But the WHO didn’t listen to Taiwan—maybe the Quad should.

Gary Sands is a senior analyst at Wikistrat, a crowdsourced consultancy, and a Director at Highway West Capital Advisors, a venture capital, project finance, and political risk advisory. A former diplomat with the U.S. Overseas Private Investment Corporation, he has contributed a number of op-eds for Forbes, U.S. News and World Report, Newsweek, Washington Times, The Diplomat, Asia Times, The National Interest, EurasiaNet, and the South China Morning Post. He is now based in Taipei, Taiwan.