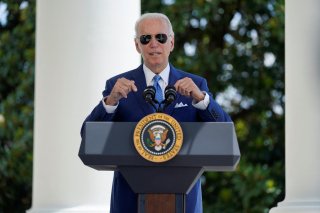 President Joe Biden on Tuesday signed into law a $280 billion package that aims to boost the domestic chip-making industry and scientific research.

During an event on the South Lawn of the White House, Biden described the new law as a “once-in-a-generation investment in America itself.”

“Today America is delivering, delivering, and I honest to God believe that fifty, seventy-five, hundred years from now from people who will look back on this week, they’ll know that we met this moment,” he continued.

“We know there are those who focus more on seeking power than securing the future, those who seek division instead of strength and unity, who tear down rather than build up. Today’s a day for builders. Today, America is delivering,” he added.

The CHIPS and Science Act—short for the Creating Helpful Incentives to Produce Semiconductors for America Act—will subsidize domestic semiconductor manufacturing and invest billions in science and technology innovation, with an aim to bolster the country’s competitiveness and self-reliance. More than $50 billion will be allocated for semiconductor manufacturing and research, tens of billions of dollars will go to strengthening regional technology hubs, and billions of dollars will be allocated to the National Science Foundation, the Department of Commerce, and the National Institute of Standards and Technology.

The White House said that multiple companies, “spurred” by the new legislation, have already announced more than $44 billion in new semiconductor manufacturing investments.

Supporters of the bill, which passed both chambers of Congress last month with bipartisan support following months of negotiations, have contended that the legislation is long overdue and will help lower U.S. reliance on China and other countries for chip manufacturing, which they say poses a growing national security risk.

As manufacturing has moved overseas for much of the past three decades, Biden noted that the United States currently accounts for less than 10 percent of global production of semiconductors.

“American manufacturing is the backbone of our economy, and it was hollowed out,” the president said.

“We let semiconductor manufacturing go overseas, and as a result, today, we barely produce 10 percent of semiconductors, despite being a leader in chip design, as well as research,” he added.

CBS News reported that the heads of Intel, HP, and Lockheed Martin, the governors of Illinois and Pennsylvania, and mayors from Ohio, Michigan, Texas, Idaho, and Utah attended the bill-signing event.

Biden said those assembled “represent why we are better positioned than any other nation in the world to win the economic competition in the twenty-first century.”

"We can channel all our resources. Most of all we can channel the full talents of all our people, and their greater measure of hope and opportunity for our nation and for the world. To create good jobs, empower workers, grow the economy—not just for the wealthy, but grow for everyone,” he concluded.