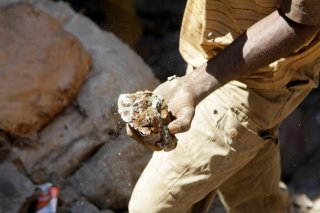 Cobalt is a critical mineral for America’s economy and military. The element is necessary for lithium-ion batteries in electric vehicles, superalloys in jet engines, and permanent magnets in advanced electronics. In the United States, batteries comprise 52 percent of cobalt end-uses, and superalloys represent 31 percent of end-uses. These cobalt applications are vital for energy technologies like wind energy storage and defense equipment like F-35 fighter jets.

Without cobalt, neither America’s clean energy revolution nor its high-tech military modernization is possible. But, there is a problem: the United States relies heavily on cobalt supply chains controlled by foreign companies and countries—especially China. Therefore, the United States—and its economic and military future—is dangerously vulnerable to geopolitical and market risks in the cobalt supply chain.

A caveat to the above fact is that the United States is sitting on much more cobalt. In 1959, Calera Mining Company estimated that the Blackbird mining district in the Idaho Cobalt Belt had nearly 110,000 metric tons of cobalt reserves, making it the world’s “largest known reserve of high-grade cobalt ore.” Additionally, America has 1 million metric tons of potentially economically recoverable cobalt resources—mainly in northeastern Minnesota.

At the moment, however, America’s cobalt is largely untapped. And even if the United States tapped the reserves, the DRC’s influence on the market would certainly not diminish. The DRC currently produces 71 percent of the world’s cobalt ore, while the United States produces only 0.4 percent at one mine—Eagle Mine in Michigan, which will cease production in 2026. However, later this month, the Australian company Jervois will commission its Idaho cobalt mine and projects to produce 1,900 metric tons of cobalt annually.

The refining process makes the cobalt supply chain more precarious. China refines 72 percent of the world’s cobalt, while the United States refines 0 percent. In other words, the United States relies 100 percent on imports and secondary scrap materials for its cobalt consumption.

As for those imports, even they are vulnerable. Most refined cobalt imports come from Norway (20 percent), Canada (16 percent), Japan (13 percent), and Finland (11 percent). However, as noted above, China dominates the mining supply that refining companies in these—ostensibly—friendly countries source from.So, in practical terms, cobalt supply chains still depend on China and are subject to significant geopolitical risks.

The Geopolitical Risks of Cobalt

The second geopolitical risk concerns the DRC’s business environment, which can change dramatically depending on decisions in Kinshasa, the country’s capital. The DRC government can, for instance, increase taxes, which would likely decrease downstream cobalt supply. Ivan Glasenberg, the former CEO of mining giant Glencore, cited higher taxes in 2019 as one reason for pausing ore production at Glencore’s Mutanda mine.

Additionally, the DRC government can change regulations, revoke permits, or renegotiate contracts. Earlier this year, DRC president Felix Tshisekedi said that he seeks to “rebalance” previous DRC mining deals with foreign companies. The operating conditions in the DRC also expose cobalt companies to legal (e.g., U.S. Foreign Corrupt Practices Act) and reputational risks. In sum, the DRC can be a rocky place to do business.

The third major geopolitical risk is regional and global events, such as wars, pandemics, and natural disasters. Cobalt mined in the DRC is generally railed to South Africa and shipped globally from the port of Durban, the world’s leading port for cobalt exports. However, during the coronavirus pandemic, the South African government instituted a strict shutdown that delayed cobalt shipments and negatively impacted downstream companies. Some companies sought alternate export routes like the port of Dar-es-Salaam in Tanzania, but these routes experienced storage and shipping capacity issues.

Natural disasters can also affect cobalt supply chains. In 2022, major flooding in South Africa damaged critical infrastructure at the port of Durban, requiring the port to suspend operations temporarily. Even after resuming operations, the port then had a shipping container backlog, which took nearly a week to clear. More significant natural disasters in the future would create longer suspensions and more extensive backlogs.

The Market Risks of Cobalt

Even if regional and global geopolitics, including mother nature, align perfectly with U.S. preferences, cobalt supply chains face market risks. These too can be put into three categories.

A 2018 European Commission’s Joint Research Center report noted, “The expansion of the electric vehicle market globally and in the EU will increase exponentially the demand for cobalt in the next decade.” Reflecting increased demand, cobalt prices have increased from about $36,000 per metric ton in July 2020 to about $52,000 per metric ton today.

The second market risk concerns the nature of mining cobalt, which is a tricky proposition because 90 percent of cobalt is mined as a byproduct of copper or nickel. For instance, the DRC produces most of its cobalt from copper operations, like the Kamoto copper-cobalt mine. Therefore, cobalt mining faces market dynamics for copper and nickel mining.

Troy Nazarewicz of Fortune Minerals wrote in an article for Resource World magazine that “[a]s the price of [copper and nickel] has declined, a number of mines have been idled resulting in reduced cobalt production at a time when demand for cobalt is growing rapidly.” The only significant mine that primarily produces cobalt is the Bou Azzer mine in Morocco. Eventually, a few pending mines in Idaho will as well. However, most cobalt mining remains subject to market forces unrelated to cobalt.

As the world enters a transformative era characterized by U.S.-China competition and the clean energy revolution, it is beyond evident that cobalt will play a pivotal role. Companies and countries that mine and refine cobalt will control the advanced technologies—batteries in renewable energy, alloys in jet engines, magnets in military radars—in which cobalt is essential.

But at the moment, the United States is dangerously reliant on foreign companies and countries, including its geopolitical rival China, for cobalt. As the situation stands, foreign actors, not Americans, will hold influence over the future security and prosperity of the United States. Moving forward, American industry and the U.S. government—like Chinese companies and the Chinese Communist Party—must work together to bolster domestic mining and refining of cobalt.