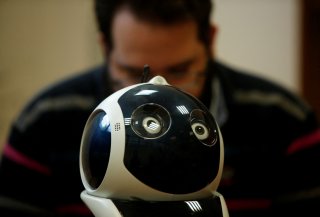 The great power contest between the United States and China is evolving as both race to achieve superiority in areas such as artificial intelligence (AI) and quantum computing. As a result, the two countries continue to pursue rapid and transformative innovation, with the U.S. and Chinese governments, universities, and companies investing roughly 3.1 percent and 2.2 percent of GDP, respectively, in technology research and development (R&D) in 2019. To maintain U.S. leadership and the country’s technological edge, U.S. policymakers should expand their use of federal prize competitions––a valuable yet often underutilized tool that serves to propel innovation forward.

Federal competitions can focus innovation on national security areas of interest in which the private sector may be less incentivized, and they can help cultivate diverse talent. Each of these areas were concerns outlined in the Final Report of the National Security Commission on Artificial Intelligence (NSCAI). To meet these concerns, federal prize competitions offer a bridge to private sector innovation. They are also not a new tool for innovation, having been first addressed in legislation by the Stevenson-Wydler Technology Innovation Act of 1980. The America COMPETES Act of 2010 updated the concept and authorized the head of any federal agency to convene and host federal prize competitions. Applied effectively, these competitions offer a pathway for driving innovation and for the discovery of untapped U.S. talent, further strengthening the country's position to face the challenges of the twenty-first century vis-à-vis China.

Federal prize competitions drive innovation in two major ways. First, competitions facilitate rapid innovation and the advancement of subject-matter knowledge. For example, starting in 2018, the National Institute of Standards and Technology’s (NIST) Differential Privacy Synthetic Data Challenge series tasked participants with developing methods for anonymizing data sets while maintaining the data’s utility. After three consecutive challenges that built upon one another, NIST was able to use competitors’ methods to establish benchmarks to measure future progress.

Second, policymakers can use federal prize competitions to solicit tools and solutions aimed at solving real-world problems, which in turn stimulate innovation. A successful competition may result in the creation of a new technology or participants innovating to meet a demand for specific agency requests. As a recent example, in 2020, the U.S. Navy launched the Artificial Intelligence Applications to Autonomous Cybersecurity Challenge (AI ATAC) series to solicit tools that could improve the detection and response of cyber attacks and advanced persistent threats. Over the course of the challenge, and because of the ingenuity of the participants, the Navy identified the potential for AI-enabled tools to relieve human analysts of certain analytical burdens, such as reducing time spent on triaging security alerts, and was also able to measure the performance and capabilities of commercially-available tools. This, in turn, means that federal prize competitions can also help the U.S. government with purchasing decisions, helping decisionmakers understand how commercially-available tools perform before a major procurement.

In addition to promoting innovation and offering solutions to critical problems––often with less risk and sometimes greater efficiency than other acquisition alternatives––competitions also shift the risk of failure from sponsors to participants. Rather than spending budget allocations to manage new projects that risk failure, sponsors merely incentivize researchers and participants to shoulder more of the risk. Although the prize must be commensurate with the investments made by participants, the agency does not have to award the prize if no one meets the competition’s defined requirements. While this may seem counterproductive, initial failures often lead to future success. For example, no team completed the Defense Advanced Research Projects Agency’s (DARPA) first autonomous vehicle challenge in 2004, and the $1 million prize was not awarded. In the following year, multiple teams succeeded, and the new $2 million prize purse was awarded to the first team to cross the finish line. This has since helped spark enormous progress in autonomous vehicle research and development.

Competition prizes can come in the form of either monetary or non-monetary incentives. The Air Force Research Laboratory tasked participants with creating solutions to improve AI chips. Rather than offering a cash prize, the Air Force gave qualified participants access to a variety of developmental tools valued at $10 million per license. This aligns with another component of the NSCAI’s Final Report: expanding access to AI R&D resources like test beds and datasets. Competitions effectively multiply their value with each new participant. These dynamics enable the pursuit of ambitious goals and allow the sponsoring agency to rigorously evaluate any solution prior to procurement.

Technological advancements have been at the center of U.S. power and economic performance over the last century. The United States today is in a period of international competition with elements of scientific research and development receiving attention from policymakers comparable to the Cold War. Geopolitical competition during the Cold War brought about the development of new technologies through generous and specific federal funding, and even pushed nations to steal foreign technology. But Cold War levels of government funding for R&D––the United States accounted for 69 percent of global research spending in 1960––are unlikely to be seen again. Since then, the proportion of federal government funding has fallen to just over 20 percent of total R&D spending in the United States.

Ali Crawford is a research analyst at Georgetown University’s Center for Security and Emerging Technology (CSET), where she works on the CyberAI Project. Follow her on Twitter @ali_craw.

Dakota Cary is a research analyst at Georgetown University’s Center for Security and Emerging Technology (CSET), where he works on the CyberAI Project. Follow him on Twitter @DakotaInDC.