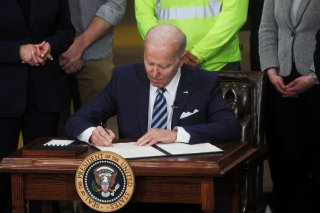 This week, President Biden signed a pair of new bipartisan cybersecurity bills into law. According to The Hill, the bills are the Federal Rotational Cyber Workforce Program Act and the State and Local Government Cybersecurity Act. The two bills were generally noncontroversial and passed without much vocal opposition from members of either party.

In May, Biden issued an executive order on cybersecurity, titled Improving the Nation’s Cybersecurity. The president also thanked the bipartisan sponsors of the legislation.

The first bill, the Federal Rotational Cyber Workforce Program Act, took something of a circuitous route to the president’s desk. It passed the House back in 2019, during the previous Congress, and was reintroduced in April of 2021, before passing via unanimous consent in December. After passing the House via a voice vote in May, the bill was signed by the president this week.

According to The Hill, the rotational bill “establishes a program to allow cybersecurity professionals to rotate through multiple federal agencies and enhance their expertise,” while also requiring the Office of Personnel Management (OPM) to “distribute lists of open positions in the program to government employees annually.”

“State and local governments with limited resources and cybersecurity expertise can struggle to secure their systems against malicious hackers that could expose their constituents’ personal data,” bill co-sponsor Senator Gary Peters (D-MI) said after the first Senate passage of the bill in 2019.  “I’m pleased the Senate passed my bipartisan bill that will help ensure all levels of government can bolster their defenses and protect themselves from sophisticated cyber-attacks,” Peters continued.

Sen. John Hoeven (R-ND), another co-sponsor of the legislation, hailed the passage of the Rotational Cyber Workforce bill on Wednesday. “Cyber-attacks targeting our nation continue to grow in frequency and complexity, and it is essential that we stay ahead of our adversaries and others who seek to illegally access and disable critical systems, including those run by federal agencies,” the North Dakota senator said in a statement.

“That’s why we advanced this legislation to improve career opportunities for cybersecurity professionals, including those in the private sector, who want [to] bring their expertise to the federal government. The personnel rotation program created by our bill will help ensure federal agencies can recruit and retain a skilled workforce that is better able to protect against and counter the threats we face.”