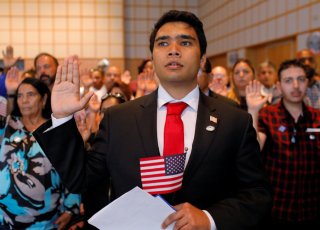 A coalition of dozens of former national security officials including former cabinet secretaries wrote to Congress this week urging lawmakers to use the ongoing conference negotiations of competitiveness legislation to allow more foreigners with science, technology, engineering and math expertise to work in the United States.

“In today’s technology competition, the most powerful and enduring asymmetric advantage America has is its ability to attract and retain the world’s best and brightest,” the former officials wrote, “The Chinese Communist Party recognizes this; Chinese sources say that U.S. expansion of its international talent pipelines “would pose a huge challenge to China.”

The former national security leaders’ letter follows recent moves by the Biden administration to create new pathways for high-skilled immigrants to come to or remain in the United States.

In an April 28 letter to Congress, President Joe Biden submitted his request for fiscal year 2022 supplemental funding for critical security and economic assistance to Ukraine.

On the subject of Russian STEM immigration, the amendment Biden had in his request would modify parts of the Immigration and Nationality Act in the following way:

This request would amend section 203(b)(2) of the Immigration and Nationality Act to eliminate the requirement that Russian STEM professionals have an employer sponsor in the United States before applying for an employment-based visa, and would require the Department of Homeland Security to expedite consideration of such applications. This authority would help the United States attract and retain Russian STEM talent and undercut Russia's innovative potential, benefitting U.S. national security.

On January 21, 2022, the Department of Homeland Security added twenty-two new fields to the STEM Optional Practical Training (OPT) program. The STEM OPT program allows  students studyign in the United States with F-1 visas in STEM fields to stay in the United States for up to thirty-six months to work in their field.

Additionally, according to CRS, the largest source of STEM students from the United States was China in the 2017 and 2018 school years. Even in recent years, despite Covid-19 and rising authoritarianism, members of Congress should recognize that foreign students from the People's Republic of China account for the largest share of foreigners studying STEM fields in American higher education.

Out of the 317,299 students from China, a majority of them were studying a STEM field in the United States.  Allowing these students to stay instead of making them leave when they finish their degrees is a common-sense way to keep STEM talent in America.

In immigration policy, there are difficult trade-offs to be made. However, in this case, ensuring provision 80303 remains in the reconciled competitiveness bill would be a simple way to strengthen American security by making it easier for STEM talent to stay in the United States. Congress should follow the advice of the national security experts and ensure that the provision remains and that America remains the top destination for STEM talent.

Lars Erik Schönander is a policy technologist for Lincoln Network.