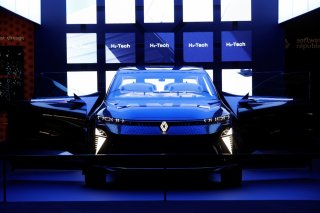 It’s a common futurist’s lament: “Weren’t we supposed to have flying cars by now?”

There are some companies trying to make that happen, but one of them just folded. Kittyhawk Aero, named for the town in North Carolina where the Wright Brothers launched the first plane, was founded in 2010.

“Kittyhawk is building autonomous, affordable, ubiquitous, and eco-conscious air taxis,” the company’s website said. “Founded by self-driving car pioneer Sebastian Thrun and backed by Google co-founder Larry Page, Kittyhawk has been advancing aviation for more than a decade and has built and flown more than 100 aircraft. If anyone can do this, we can.”

It turns out, they couldn’t—Kittyhawk announced last week that it will shut down.

“We have made the decision to wind down Kittyhawk. We’re still working on the details of what’s next,” the company said in a LinkedIn post.

According to The Verge, Kittyhawk had already shut down work on the Heaviside vehicle, its major product, and Page “had become increasingly hands-off from the company.”

“Wisk was established in 2019 as a joint venture between The Boeing Company and Kitty Hawk Corporation, two leaders in aviation who are shaping the future of mobility. Headquartered in Mountain View, CA with locations in Atlanta, GA, and New Zealand, our vision of delivering safe, everyday flight for everyone is closer than ever to becoming reality,” the company said.

Kittyhawk was known at the time of its founding in 2010 as Zee.Aero. Four years ago, it showed a demonstration of a flying car, but that production never became a reality. Techcrunch published an analysis of the company’s timeline.

“Kitty Hawk operated largely in secret for years — except for the occasional media scoop — until the middle of the decade when it introduced its Flyer aircraft. The single-seater, all-electric, vertical take-off and landing vehicle was the company’s inaugural moonshot to develop an ultralight electric flying car designed for anyone to use,” the site said. In all, the company built more than 100 aircraft in its more than decade-long life.

Meanwhile, Bloomberg News reported this week that another taxi startup, Vertical Aerospace, has launched a product called the VX4 whose prototype recently lifted off for the first time. The company’s goal is to certify its first aircraft by 2025.

Also, the CEO of Wingcopter, a German drone delivery firm, appeared in the comments of the LinkedIn post, encouraging former Kittyhawk employees to apply for the forty open positions it has.