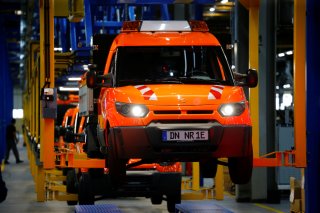 The vehicles will be used for “last-mile” deliveries, which are meant to help meet Walmart’s goal of zero emissions by 2040. The first deliveries will take place in 2023.

“We are proud to have been selected by Walmart, one of the most sophisticated buyers in the world, to provide our high-tech, all-electric, American made Lifestyle Delivery Vehicle to add to their impressive logistics capabilities. Our LDV has the turning radius of a small passenger vehicle on a parking-friendly, compact footprint, yet the payload and cargo space of a commercial delivery vehicle. This is the winning algorithm to seriously compete in the last mile delivery race, globally,” Tony Aquila, the CEO of Canoo, said in the press release announcing the deal.

Walmart associates will drive the cars. Per Gizmodo, it follows Amazon’s deal with Rivian for 100,000 electric vans. The announcement from Walmart also came on the first day of its rival Amazon’s annual Prime Day.

“We’re thrilled to continue diversifying our last mile delivery fleet with Canoo’s unique and sustainably focused all-electric technology which will provide our associates with safe, ergonomic delivery vehicles,” David Guggina, senior vice president of innovation and automation for Walmart U.S., said in the release. “Today, the closest Walmart to customers is right in their pockets – it’s the Walmart app. By continuing to expand our last mile delivery fleet in a sustainable way, we’re able to provide customers and Walmart+ members with even more access to same-day deliveries while keeping costs low,” Guggina said.

Canoo, formerly known as Evelozcity, is based, like Walmart, in Bentonville, Arkansas. As recently as May, per The Verge, the company was concerned that it was running out of cash.

“As of the date of this announcement, we are reporting that there is substantial doubt about the Company’s ability to continue as a going concern,” Canoo said in its earnings report for the first quarter. Last year, there was an investigation into the company’s merger with a special-purpose acquisition company.

However, the Walmart deal appears to be a boon to the company. Per CNBC, the company’s stock has been surging since the deal was announced.