A Home Run: Yankee Stadium Is Getting Upgraded 5G Coverage 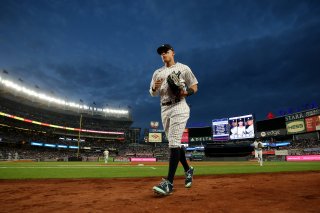 Most sports fans have experienced slow or undependable cellular service, but one venerated sports franchise aims to solve the problem.

The New York Yankees and T-Mobile announced Thursday that they have teamed up to deliver improved 5G coverage to Yankee Stadium, with speeds up to five times faster than previously available.

More 5G upgrades are to come to the stadium next year, the announcement said. The current Yankee Stadium opened in 2009, replacing the previous ballpark of the same name next door in the Bronx.

“Yankee Stadium is home to one of the most iconic franchises in the history of American sports,” Neville Ray, President of Technology at T-Mobile, said in the release. “Now, New Yorkers and people visiting from across the country to catch a game have access to ultra-fast, reliable 5G so they can share more of that experience.”

Ultra Capacity 5G will be available in some parts of the stadium, while LTE inside the ballpark will also be upgraded for those with older phones.

“We are excited to have the power of T-Mobile’s Ultra Capacity 5G network in Yankee Stadium and look forward to continuing to work together with T-Mobile to enhance the in-Stadium experience for our fans,” Mike Lane, the New York Yankees Chief Information Officer and Senior Vice President, Technology and Broadcasting, said in the release.

To mark the occasion, the Yankees sent a drone around Yankee Stadium, filming the concourses, club level, and down to the field itself, into retired numbers and Monument Park. Retired Yankees greats Bernie Williams and Hideki Matsui were part of the presentation.

In addition to the newly announced Yankee Stadium deal, T-Mobile has purchased naming rights in several cities. The Seattle Mariners home stadium, formerly known as Safeco Field, has been called T-Mobile Park since 2019, while the hockey arena in Las Vegas that hosts the NHL team Vegas Golden Knights is called T-Mobile Arena. And the sports arena in Kansas City, formerly called the Sprint Center, is now the T-Mobile Center, following the Sprint/T-Mobile merger, although that arena does not host any major league sports franchises.

The Yankees, with a record of 73-45, are currently in first place in the American League East by ten games, including a 42-17 record at home. However, they have only won three of their last ten games and now have only the second-best record in the American League, after the Houston Astros. They also have three fewer wins than their crosstown counterparts, the New York Mets, who are 76-42.