Mass Production of Tesla's Cybertruck Is Still a Year Away 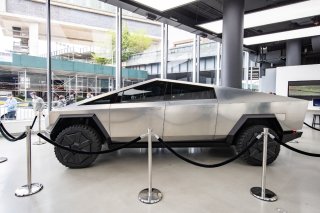 Tesla’s Cybertruck was first announced in 2019, with a reveal event that included “unbreakable” windows being broken by a thrown rock.

“Cybertruck is built with an exterior shell made for ultimate durability and passenger protection. Starting with a nearly impenetrable exoskeleton, every component is designed for superior strength and endurance, from Ultra-Hard 30X Cold-Rolled stainless-steel structural skin to Tesla armor glass,” the company’s website says.

Nearly three years later, the Cybertruck still hasn’t arrived, with the planned launch delayed multiple times since its unveiling in 2019. And a new report says mass production is likely a year away.

Reuters reported this week that mass production of the Cybertruck will begin “at the end of 2023,” with its plant in Austin being prepped for “early production” in mid-2023. The Reuters report cited “two people with knowledge of the plans.”

Per the report, Tesla will not see revenue from the Cybertruck until 2024. Musk has said, though, that the company has received "more orders of the first Cybertrucks than we could possibly fulfill for three years after the start of production."

“We're in the final lap for Cybertruck,” CEO Elon Musk said on Tesla’s most recent earnings call, per a transcript by Motley Fool.

“We're building a Cybertruck line here at Giga Texas… and making a lot of progress in the robotaxi platform design. And then with respect to batteries, we're moving as fast as possible to have—to achieve 1,000-gigawatt hours a year of production capacity in the United States vertically integrated. And our cathode Tesla refining, we're moving a ton of speed to do that. So, I think it's an incredibly exciting future and really an unprecedented future.”

Musk also talked about the Cybertruck during the Q&A portion of the call.

"At this point, we've done the engineering for Cybertrucks and for Semi. So, it's obviously against what we're working on, which is the next-generation vehicle, which will be probably about the cost of 3 and Y platform. It will be smaller, to be clear,” he said.

Electrek, a site that covers Tesla and other electric car news, questioned whether the report meant an actual delay.

“One thing is clear: The Reuters report does not mean Cybertruck production is delayed,” the site said. “As for meaning that is accelerating the timeline, I wouldn’t bet on that, either. Honestly no one, including Tesla, probably knows when mass production is going to be achieved.”

“Maybe the report is founded on some suppliers – based on the schedule that Tesla gave them – which is most likely more aggressive than it actually planned to be, to make sure that the suppliers are not the bottleneck.”