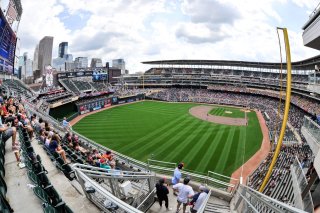 Augmented reality (AR) has come to a Major League Baseball stadium, with the announcement that the Minnesota Twins are bringing ARound to Target Field in Minneapolis. The program is described as “a first-of-its-kind stadium-level shared augmented reality (AR) platform.”

The program will allow fans at games to use their smartphone to play games, like Batter Up, Blockbuster, and Fishin’ Frenzy, during the downtime while they’re at the ballpark.

"We're excited to introduce our fans to this never-before-seen technology as we continue to evolve and enhance the Target Field experience," Minnesota Twins Senior Director, Brand Experience & Innovation Chris Iles said in the deal's announcement. "Part multi-player video game, part augmented reality, with the ability for future expansion into an interactive next-gen stats platform, we believe what we've built with ARound will provide fans a next-level experience available only at Target Field."

The tech will also have unique applications at the ballpark to give sports fans something to do during the large amounts of downtime at each game. There will also be special VR programming after home runs or other special occasions that happen over the course of a baseball game.

"Current AR platforms isolate users in singular experiences. ARound believes massive, multi-user AR enables a host of creative opportunities to redefine what it means to be part of a connected fan experience," ARound Founder and CEO Josh Beatty said in the announcement. "Be it a player, a mascot, a brand, a play or even another fan, ARound captures people's attention and brings them closer to what's right in front of them – during times they might otherwise be unengaged and on their phones – turning distraction to interaction and enhancing their overall experience."

ARound’s website says it will be at Target Field for the remainder of the season and coming to “more places soon.”

"Shared augmented reality is the next frontier that sports teams, brands, and other organizations should adopt as they look for ways to engage their audiences,"   Stagwell Chairman and CEO Mark Penn said in the announcement. "At Stagwell, we don't just talk about the next frontiers of marketing and technology – we build them, and support founders through their growth."

Penn is the same Mark Penn who worked as a strategist and pollster for Hillary Clinton’s presidential campaign in 2008 before later going to work for Microsoft.

The Twins, with a 62-58 record, are currently in second place in the American League Central, although they have lost their last three games.