More Than Energy: Why Biden and the Gulf States Must Discuss Tech 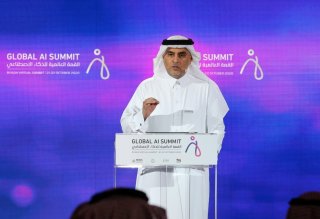 Policymakers in Washington are stuck in the past; they continue to limit their perspective of the Gulf Cooperation Council (GCC) to the energy security standpoint. U.S. policymakers have yet to understand that the region has grown too large, powerful, and independent to be confined to the lens of energy and great power competition. With the emergence of data as a new commodity needed to compete on a global scale, policymakers should have a firm grasp on a digital agenda which should include discussions with U.S. tech companies in regions pertinent to U.S. national security, like the Middle East. In President Joe Biden’s upcoming visit to Saudi Arabia, the administration needs to understand that tech and digital issues should be a pillar of dialogue with U.S. partners and allies in the GCC. On data governance and technology, the United States and its historical partners in the Gulf are growing further apart. If data and technology are not included in bilateral relations, Washington and its Gulf partners risk wasting a strategic opportunity to reshape their relationship in the twenty-first century. A reinvigorated U.S.-Gulf partnership based on deep technology cooperation is critical to advancing America’s interests in the region. It is also an effective strategy for safeguarding the GCC’s global interests and boosting its technological ambitions.

Since the 2010s, Gulf countries such as the United Arab Emirates, Saudi Arabia, Bahrain, and Qatar have been undertaking large-scale digital transformations, particularly in terms of internet penetration, government services, data outflows, and smartphone usage. The Gulf nations also engaged in developing local tech human resources and bringing global technology companies to their local markets. The Gulf states deploy their energy-fueled wealth to build digital infrastructure and, as a result, increase their digital resilience. This digital transformation in the Gulf is taking place at a time when the Gulf is extending its global presence and influence, from the Saudi G20 presidency in 2020 to the Dubai Expo 2020 and the FIFA World Cup in Qatar in 2022.

China’s Geotech and the Gulf

The Gulf countries believe Washington has taken them for granted strategically. It is in their national interests to re-establish new contours for more equal bilateral ties with the United States. While decoupling from Washington is not a goal for the Gulf capitals, they also realize that the global map has changed since ties were established. The new world order has afforded them more strategic resiliency to not only resist pressure from Washington but also from Moscow and Beijing that goes against their own national internet.

Policymakers in Washington should view the growing cooperation between its Gulf partners and China as a way for the Gulf states to meet their needs in critical tech industries by working with Beijing on a transnational basis, rather than as a choice against the United States. Furthermore, the Gulf has adopted a more sovereignty-centered approach to data regulation, while investing in an open 5G network that will keep the Gulf out of the current U.S.-China tech Cold War.

Although the U.S.-GCC digital relationship may never be completely harmonized, policymakers should prioritize fixing these discrepancies. To have a better understanding of a digital agenda, the U.S. government must engage in candid and open dialogues with tech companies about the primary tech concerns they have faced in the GCC. The United States and the Gulf states should establish institutional frameworks to bridge their tech differences. This approach is not new for Washington. The United States and the EU have established the Trade Tech Council (TTC), which provides “a framework to promote cross-agency, whole-of-government coordination on U.S. and EU approaches to key global trade and technology issues, to deliver security and prosperity.” The U.S.-EU TTC should be used as a model for this proposed institutional framework between the United States and its Gulf partners to solve their tech problems. By bringing cabinet-level officials working on foreign policy, trade, and tech issues, Washington and Gulf capitals should establish working groups addressing issues varying from data governance to e-commerce, and from blockchain to decentralized finance.

President Biden should use his next Middle East visit to announce the creation of a digital ministerial policy/working group. If left unresolved, the disagreements between Washington and the Gulf capitals on tech and cyber issues will add to the strain facing the security and strategic dimensions of bilateral relations. Washington and the Gulf capitals must think beyond energy to address critical challenges such as tech and cyber, which will ultimately cement their strategic relations for the twenty-first century.

Mohammed Soliman is a global strategy advisor and a nonresident scholar at the Middle East Institute. Follow him on Twitter @thisissoliman.