New York Announces All New Cars Must Be Electric Starting 2035 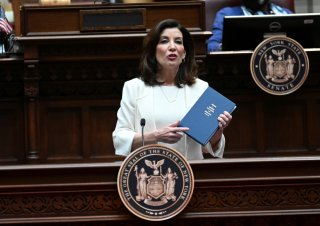 Earlier this year, California became both the first state and the first government anywhere in the world to set a date when it will no longer allow sales of gas-powered cars. Washington state followed not long after, and now New York’s governor has announced her intention to do so as well.

Gov. Kathy Hochul issued the “Directive to Advance Zero-Emission Vehicles Requirements by 2035 for All New Passenger Cars, Pickup Trucks, and SUVs Sold in State.” It was issued on the occasion of National Drive Electric Week.

Hochul, who is running for re-election this year, directed the State Department of Environmental Conservation, to “take major regulatory action that will require all new passenger cars, pickup trucks, and SUVs sold in New York State to be zero emissions by 2035.” The actual regulation will come later; California’s governor had taken a similar step last year, ahead of the rule becoming official this summer.

“New York is a national climate leader and an economic powerhouse, and we’re using our strength to help spur innovation and implementation of zero-emission vehicles on a grand scale,” the governor said in a statement.

“With sustained state and federal investments, our actions are incentivizing New Yorkers, local governments, and businesses to make the transition to electric vehicles. We’re driving New York’s transition to clean transportation forward, and today’s announcement will benefit our climate and the health of our communities for generations to come.”

Not everyone in New York is happy with the decision. The New York Post, in an editorial this week, called the move “maddening.”

“In an all-too-tellingly-empty stunt, Gov. Kathy Hochul last week ordered the state Department of Environmental Conservation to issue regulations banning the sale of gas-powered cars, pickups, and SUVs by … 2035,” the newspaper said. “It’s not just that she’ll be long gone by then, or that she was simply marking National Drive Electric Week by pretending to keep up with California’s similarly dubious 2035 only-electric rule.”

Meanwhile, Vice reported this week on plans for New York City to build out a network of charging stations. Compared to most of the country, few New Yorkers have driveways, and the city didn’t install its first curbside charger until last year.