A Semiconductor Bill? Congress Should Go Back to the Drawing Board 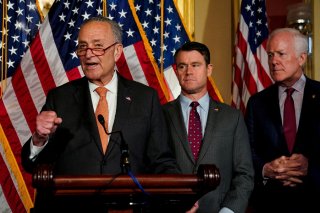 When most Americans think of Washington, they think of lobbyists, loopholes, and bailouts.

They’re not wrong. On Wednesday, the Senate voted sixty-four to thirty-three on a $76 billion semiconductor subsidy and tax credit bill that could balloon through an amendment to fund all sorts of bureaucratic initiatives for advanced technology. The next day, the House voted 243-187 in favor of the bill as well, sending it to President Joe Biden’s desk. Together all this could potentially reach a price tag to taxpayers of $280 billion.

Intel and Texas Instruments are just some of the companies that expect to benefit financially from this boondoggle that independents and Republicans, bucking party leaders, should oppose for two reasons. It won’t work because it is a scattershot bureaucratic strategy, and it is unfair because it puts significant taxpayer funds at risk without any upside potential. Before getting to a better strategy, we need to look back to why our semiconductor supply chain is fractured and how peer rival China is catching up.

This “Chips and Science” bill is rich in irony because the reason American semiconductor firms aren’t competitive in advanced semiconductor chips is primarily due to the decisions they have made to always put share price above America’s economic and national security.

Unlike semiconductor chip design, which is not capital intensive and offers high-profit margins, the fabrication of chips, especially high-performance advanced chips, requires enormous amounts of capital, time, and technical skill. U.S. foundries that make the still-important but less-advanced chips should largely fund their capital needs through financial markets.

Now it would be very hard to overstate the importance of semiconductors to the future of the U.S.-China rivalry and America’s economic and national security. Semiconductors are the most strategically important technology because they underpin the circuitry at the heart of everything from smartphones to advanced satellites.

You might think of these microchips as the brains inside all advanced technology. Equally critical is building a cushion of government and private stockpiles of semiconductor supply chain inputs such as rare earths and metals. These can serve as a bridge until we have secure domestic mining and refining in place—a process that could take a decade or more and also require expedited permitting and financial support.

Today, 75 percent of total chip production is in Asia, with China on a trajectory that could give it a 30 percent market share by 2030. By 2025, 40 percent of the world’s capacity to produce chips with 28-nanometer nodes will be in China, up from 15 percent last year. China is investing significant resources in becoming self-sufficient in both mature and more advanced chips including by offering tax waivers for up to ten years. China is also on a buying spree of the world’s chip-making equipment.

While U.S. regulations block China from the most advanced chipmaking equipment, in 2021, Chinese foundries bought almost $15 billion in from three American companies: Applied Materials, Lam Research, and KLA Corp., according to the Wall Street Journal. Meanwhile, many American leading chipmakers still receive 35 percent or more of annual revenue from China in one form or another.

Advanced Micro Devices, better known as AMD, has a China story that sums up America’s vulnerability due to the seeking of profits at all costs. In 2008, it spun off its lower margin, capital-intensive chip fabrication operations to go as they say in the industry, fabless, through the formation of Global Foundries. The Emirate of Abu Dhabi then became the owner of Global Foundries through its sovereign wealth fund: the Advanced Technology Investment Company (ATIC).

AMD’s next move in 2016 was even more controversial.

In short, through a joint venture, AMD transferred technology to develop advanced computer-chip technology to its Chinese partners in return for a sizable cash infusion.

According to the Wall Street Journal, in February 2016, AMD reached a joint-venture deal involving a leading Chinese supercomputer developer, and a state-backed military supplier called Sugon Information Industry, to make chips licensing AMD’s advanced processor technology. In exchange, the Chinese government gave AMD $293 million in licensing fees plus royalties on the sales of any chips developed by the venture. “It’s the keys to the kingdom,” said retired Brigadier General Robert Spalding, who served on the National Security Council in 2017 and 2018.

Furthermore, in April 2016, AMD sold an 85 percent stake in two of its semiconductor factories in China and Malaysia to an entity controlled by China Integrated Circuit Industry Investment Fund for $371 million. AMD’s share price soared.

The most recent turn of events for GlobalFoundries (GFS) is telling as it went public last October through an initial public offering, raising nearly $2.6 billion.

Intel and Texas Instruments made their big blunder much earlier when both were invited and declined to participate in the funding of Taiwan Semiconductor (TSMC)—now the world’s dominant leader in producing microchips with complete domination of high-performance microchips.

TSMC was formed when the Taiwanese government persuaded the Dutch multinational Philips to partner alongside several local private firms to start a chip foundry in 1987. The Taiwanese government invested 21 percent of the start-up capital, Philips contributed 28 percent, and other private investors provided the rest.

Even more painful is that the founding CEO of Taiwan Semiconductor, Morris Chang, born in Mainland China, earned his bachelor’s and master’s degrees in mechanical engineering degrees from the Massachusetts Institute of Technology, became a U.S. citizen, and then spent a quarter-century working at Texas Instruments, with responsibility for its worldwide semiconductor business. Texas Instruments also sent him to Stanford University, where he attained his doctorate in electrical engineering.

In 1997, Taiwan Semiconductor (TSMC) listed its stock on the New York Stock Exchange and now has a market value of over $455 billion. The company now makes 12 million semiconductor wafers a year and has over 50,000 employees.  Chang has stated that TSMC’s scale and technical lead mean that production at their U.S. factories cost 50 percent more than in Taiwan.

Congress should go back to the drawing board with one goal: combining existing American and Samsung technology through a consortium that includes America's leading chip makers, chip designers, and manufacturers of chip-making equipment companies while leveraging America’s leading financial markets to produce the most technologically advanced semiconductor chip fabrication facilities in the world.

The price tag for this could reach over $300 billion over five years. American taxpayer support for this initiative should be tied to a non-voting equity stake in the consortium as a potential reward for putting taxpayer funds at risk.

South Korea’s Samsung Electronics is already investing more than $116 billion in its effort to keep up and has already announced that it is considering expanding operations in Austin, Texas. Profitable American chip designing firms such as Nvidia should also chip in capital rather than buy back their stock with excess cash.

After increasing the national debt by some $10 trillion over just the last five years, it is time for Republicans to put together a smarter strategy while reining in the federal spending machine.

Carl Delfeld is a co-founder of the Hay Seward Economic Security Initiative, publisher of the Independent Republican, and represented America on the board of the Asian Development Bank. His latest book is Power Rivals: America and China’s Superpower Struggle.