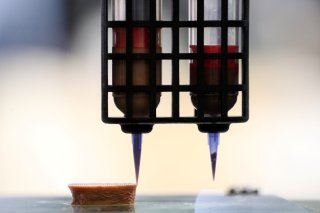 3D printing had a big moment around 2013 and 2014. It was the toast of various electronics shows and even the subject of a Netflix documentary in 2014, called  Print the Legend. It even had a culture war component, with the 3D printing mainstream questioning whether or not to get on board with 3D-printed guns.

3D printing technological craze hasn’t gone away in the years since, but it has been a bit more under the radar. Predictions from nearly a decade ago of a 3D printer soon be found in every home never quite came to pass. Nevertheless, there’s a big new push for 3D printing, and it’s coming from the White House.

The Biden administration released a fact sheet on May 6 in which it revealed it will encourage 3D printing, as part of a push for domestic manufacturing that will in turn help to reduce inflation. It’s part of a new initiative called AM Forward, which is described as a voluntary compact that any manufacturer to free to join if they wish.

“Not enough American companies are using 3D printing or other high-performance production technologies,” the White House fact sheet said. "That’s why President Biden is pleased to join several leading American companies to celebrate the launch of Additive Manufacturing Forward (AM Forward), a voluntary compact between large, iconic manufacturers and their smaller U.S.-based suppliers.”

The companies involved, which joined Biden at an event in Ohio last Friday, including GE Aviation, Honeywell, Lockheed Martin, Raytheon, and Siemens Energy. Those companies have all made certain commitments, the White House said, with Lockheed promising to “work with its SME suppliers to conduct research to improve the performance of additive manufacturing AM techniques specifically focused on the use of 3D printing as an alternative to castings and forgings.”

“Suppliers want to make these investments but don’t have the committed orders or the cash flow to make the investment, often between $3 [million] to $8 million,” officials told The Hill. “And companies don’t provide the orders because they don’t think their suppliers can actually make the parts. The private sector can’t do this alone and the federal government is going to be a key partner to help with AM Forward and address these challenges.”

The White House also urged the passage of the Bipartisan Innovation Act, also known as the United States Innovation and Competition Act (USICA), and the Endless Frontier Act. The bill is aimed at helping the U.S. compete with such global rivals as China while encouraging domestic manufacturing and creating jobs in that sector. The legislation would also establish a Supply Chain Office at the Department of Commerce.