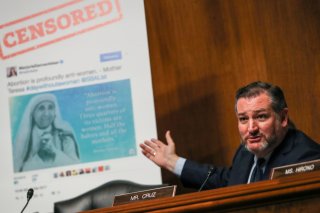 As Elon Musk offered to buy Twitter, rattling both Twitter liberals and neoconservatives and a section of journalists, another interesting development went unnoticed. There is now rare bipartisan support in favor of anti-trust laws, against the “Big Tech” companies, especially Google and Amazon. Recently, a vote to toughen competition laws against monopolistic tech passed easily with Republican support. Ted Cruz, possibly one of the most free-market Republicans still around, even suggested toughening it up further, adding that individuals can and should sue big companies and content platforms. Google and Amazon both opposed the bill, and the U.S. Chamber of Commerce raised their concerns, but apparently the movement against “Big Tech” is gaining momentum on both sides of the Euro-Atlantic.

In Europe, the European Parliament and EU member states signed the Digital Markets Act, which aims to reform tech companies from wrecking their smaller rivals and reducing their gatekeeping capabilities. As Kim van Sparrentak, a Dutch Green party minister of the European Parliament who is also a member of its internal market and consumer protection committee, was quoted to have said that the legislation is a milestone in reining in Big Tech. “We are finally talking about [how] they are too big, about interoperability, something they really, really didn’t want. These are big, big wins.”

Meanwhile, the Biden administration is planning to crack down as well. Antitrust chief Jonathan Kanter spoke in Brussels and said that “the plain text of our merger laws in the United States demand that we have aggressive enforcement against acquisitions by firms that already possess a dominant position,” a hint at Google and Amazon. Federal Trade Commission chair Lina Khan also called the European law “a landmark proposal to promote fair access to markets controlled by digital gatekeepers.” There is dissent even within the democrats. U.S. secretary of commerce Gina Raimondo was rightly concerned that Europe is discriminating against American firms, and this is a way Europe is trying to come out of American narrative control.

Needless to mention, when you have the Democratic anti-trust bureaucrats channeling the same rhetoric as their Green-Red cousins from across the pond, it is not looking good for the tech companies here. All the donations to liberal causes and silencing of conservative voices, as well as flooding of liberal and progressive causes by young and idealistic workers, did not win them liberal or progressive support on this side. Instead, it alienated the core support group that often looked after big businesses for the last few decades, the Republicans. There always was consistent liberal opposition to tech’s monopolizing power, with a few big companies controlling all aspects of life in a neo-feudal fashion. Now, they have been joined by the right.

Historically, the crown versus company moments always ended with the company losing. State power is paramount, and whenever the state feels threatened by too much power within, it crackdowns in one way or the other. Part of the reason the American system is good is that it disallows the state to concentrate power, as one can see in Europe, and offers an opportunity, for various groups to work in a balance. Unfortunately, the balance was lost, with the tech companies turning overwhelmingly liberal, betting the wrong horse, so to speak. And now the state is determined to curtail the company.

That is of course, not good for anyone. Google, Amazon, and Apple are American aggregate power enhancers if wielded correctly and provide a level of soft power and narrative control which is unthinkable and incomparable. The European opposition to American tech, and this American self-harm, will eventually result in what is the most concerning and will enable Russia and China to win the competition. As Shane Tews recently wrote,

...while European regulations such as the [Digital Markets Act] aspire to level the imaginary playing field of European tech companies, it is more likely that Chinese and Russian companies will develop third-party apps to transfer data and coding systems back to their countries. Strong security protects sensitive information and keeps unauthorized users from accessing data. All governments should be promoting preventative steps to reduce risks for platform networks and their valued users. Breaking down a successful company’s ecosystem and introducing harm to users should be considered a criminal act.

Unfortunately, unless the tech giants understand the core reason why they are where they are, they will not be able to come to a grand bargain with the only potential domestic force which might save them, the conservative free-marketers, and a tiny and declining fraction of free-market non-progressive democrats. Big tech giants should reintroduce platform neutrality, actively court conservative viewpoints, and maintain strict editorial neutrality. They should invite a conservative workforce from a section of society that feels completely abandoned by all progressive causes and evangelism. They should diversify their fixed assets and move them to the Red States, where the economy will benefit from new investment, as well as be dependent on new auxiliary sectors. They should identify sympathetic voices and promote them, and actively court privacy groups who are in turn rightly concerned about state interference, and actively lobby Congress and side with them in their concerns not just about China and Russia, but also about the European Union. But whether the tech companies have the internal support to pivot, with their overwhelmingly socially progressive work base undermining their position and preventing them from balancing and in turn threatening their survival, is another question.