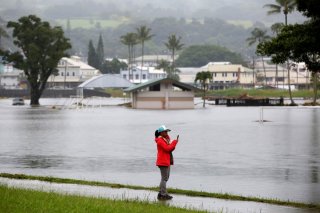 The moon and climate change will team up to produce dangerous high tide flooding on every coastline of the United States by the mid-2030s, according to a new NASA study that was published in the journal Nature Climate Change.

The surge in flooding is expected to be driven in part by the moon’s natural “wobbling” as it orbits the Earth. First identified in the early 1700s, the natural satellite’s tilt changes over an 18.6-year cycle—and that motion can have a major effect on tides on planet Earth.

“In half of the moon’s 18.6-year cycle, Earth’s regular daily tides are suppressed: High tides are lower than normal, and low tides are higher than normal,” says the study, which was led by members of the NASA Sea Level Change Science Team from the University of Hawaii.

“In the other half of the cycle, tides are amplified: High tides get higher, and low tides get lower,” it continues.

It ‘Only Get Worse’

Around the mid-2030s, NASA noted that a “leap in flood numbers” should be anticipated along U.S. coastlines, Hawaii, and Guam.

“Low-lying areas near sea level are increasingly at risk and suffering due to the increased flooding, and it will only get worse,” NASA Administrator Bill Nelson said in a statement.

“The combination of the moon’s gravitational pull, rising sea levels, and climate change will continue to exacerbate coastal flooding on our coastlines and across the world. NASA’s Sea Level Change Team is providing crucial information so that we can plan, protect, and prevent damage to the environment and people’s livelihoods affected by flooding,” he added.

Phil Thompson, an assistant professor at the University of Hawaii and the lead author of the new study, pointed out that high tide floods don’t receive the attention that’s often given to hurricane storm surges.

“But if it floods ten or fifteen times a month, a business can’t keep operating with its parking lot underwater. People lose their jobs because they can’t get to work. Seeping cesspools become a public health issue,” he said in a statement.

Ben Hamlington, a co-author of the paper and also the leader of NASA’s Sea Level Change Team, contended that the study’s findings could be a vital resource for coastal urban planners.

“From a planning perspective, it’s important to know when we’ll see an increase,” he said in a statement. “Understanding that all your events are clustered in a particular month, or you might have more severe flooding in the second half of a year than the first—that’s useful information.”

According to a recent study from the University of Copenhagen’s Niels Bohr Institute, the global rise in sea levels could potentially surge as much as four and a half feet by the year 2100.