“Its Body Looked Like a War Zone”: Air Pollution Could Wipe Out 80% of Bees in India 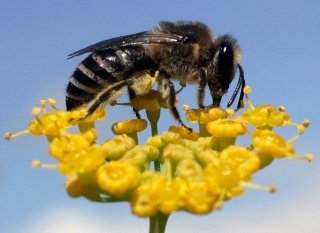 A three-year study out of India has discovered that even mild air pollution has the potential to wipe out 80% of giant Asian honey bees, a key pollinator in South Asia.

Without such bees and other insects, domestic production of fruit, vegetables, nuts, and legumes could be at heightened risk, the study’s research team noted. Moreover, this particular bee produces more than 80% of the country’s honey.

The study, which was conducted by scientists from India’s Tata Institute of Fundamental Research and published in the peer-reviewed journal Proceedings of the National Academy of Sciences, found that honey bees collected at locations with higher levels of air pollution showcased “lower survival rates as well as alterations in flower visitation, heart rate and blood cell counts,” according to a news release.

Scientists were able to sample 1,820 giant Asian honey bees across four sites in the city of Bangalore, India, which is known to have elevated levels of air pollution.

When the bees were examined, the team witnessed physical damage to their antennae and heart tissue, which the researchers noted was due to the air pollution.

One bee that was collected near an industrial area was covered with small particles that were later found to contain lead, tungsten, arsenic and an array of other toxic metals.

Another “was covered with all sorts of crud and particles,” one of the researchers, Shannon Olsson, told Science magazine. “Its body looked like a war zone.”

Without insect pollinators, an estimated 50% of mangoes would disappear, costing India about $86 million in exports alone. In 2016, the country, the world’s second-largest grower of vegetables, produced more than $3 billion of fresh fruit.

“This is an important and timely study,” Olli Loukola, a behavioral ecologist at the University of Oulu in Finland, told Science.

The findings “are the first to document the impact of air pollution on insects, and they emphasize just how far-ranging the effects of human-caused pollution can be. I think we have to be more worried,” he added.

Twenty-one of the world’s thirty cities with the worst air pollution are in India, according to data compiled in IQAir AirVisual’s 2019 World Air Quality Report.

Ghaziabad, a satellite city of the capital New Delhi in northern Uttar Pradesh state, is ranked as the most polluted city on the planet, with an average PM 2.5 concentration measurement of 110.2 in 2019. For perspective, that’s nine times higher than the level that the U.S. Environmental Protection Agency regards as healthy.