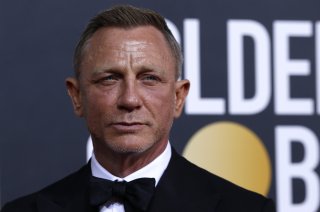 The first indication, back in the spring, that the coronavirus pandemic was going to affect movie distribution in a major way the announcement the first week in April that No Time to Die, the next film in the James Bond series, was having its planned late April release postponed.

The 007 movie, the twenty-fifth overall and the last that will feature Daniel Craig as Bond, was first moved from April to November and has since been postponed again to April of 2021, with the pandemic continuing and customers continuing to avoid movie theaters.

“MGM, Universal and Bond producers, Michael G Wilson and Barbara Broccoli, today announced the release of ‘No Time To Die,’ the 25th film in the James Bond series, will be delayed until 2 April in order to be seen by a worldwide theatrical audience,” the filmmakers said in a statement on October 2, per Variety. “We understand the delay will be disappointing to our fans but we now look forward to sharing ‘No Time To Die’ next year.”

Many movies set for studio release this year have been moved or sold off to streaming services or had their planned theatrical releases scrapped in favor of various premium video-on-demand schemes. But the assumption among most is that major, high-budget blockbusters, like No Time to Die and Black Widow, will eventually come out theatrically, even if that requires delaying them multiple times.

Some reports over the weekend indicate that perhaps that isn’t so inevitable. A site called Binged reported Friday, citing veteran film journalist Drew McWeeny, that Netflix and Apple TV+ had both made offers to make No Time to Die a streaming exclusive on their platforms. The report from Binged, a relatively obscure movie and streaming news site, also stated that MGM, the studio that owns the Bond movies, is “under tremendous pressure to sell the film to the highest bidder.”

Later that day, Bloomberg News also reported that both Netflix and Apple had been in talks to acquire “No Time to Die,” citing “people familiar with the situation.” But MGM told Bloomberg that the film is “not for sale,” and that the studio is committed to putting out the movie theatrically.

The early reports did not include a dollar figure, but Variety reported that the asking price in the talks with the streaming service was $600 million, which would have been by a significant factor the largest such sale in history. The richest such deals in the past are thought to have been in the tens of millions, although dollar figures have not been publicized in all cases.

No Time to Die had a reported budget of around $250 million, which is uncommonly expensive even by the standards of blockbuster movies, although that figure is reportedly half of what MGM asked for to sell the film to streaming.