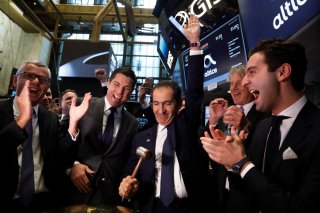 Altice USA, the owner of the cable company Optimum, announced last week that it will drop the upload speeds that offers to its customers.

“Starting on July 12, we are making some adjustments to our cable internet speed tiers for new customers,” Optimum said on its website.

“These new cable internet tiers are consistent with those offered by other internet providers and our pricing remains competitive so you can get the experience you want at a good value,” the company said. “At the same time, our 100% fiber network offers symmetrical speeds — same upload and download speeds - up to 1Gig and is available to 1 million homes and we continue to introduce this new network to more and more homes each month.”

What does this mean? According to Ars Technica, this means upload speeds will be dropping by as high as 86 percent.

Commentators have assailed Altice for the season.

“We've noted for a long time how US telecom giants, facing neither competition nor meaningful oversight, never have to try very hard,” Techdirt wrote about the change.

Thanks to their regional monopolies and duopolies over broadband access, competitors in many areas never really force them to compete on price, expand access into lower ROI areas, or shore up atrocious customer service. And thanks to the federal and state corruption that protects these regional monopolies, lawmakers generally don't much care -- outside of some occasional empty lip service to that nebulous, causation free "digital divide" they all profess to care so much about.

“So there's no technical reason to be doing this, they're just exploiting an uncompetitive market,” Techdirt continued.

So for example whereas the company used to offer a tier of 100 Mbps downstream and 35 Mbps upstream, new users now get to pay the same money for speeds of 100 Mbps downstream and 5 Mbps upstream. Existing customers will be able to keep their existing tiers, but the second they go to change their plans (which will be mandatory if they're seeking new bundle promotions) they'll lose their faster speeds and be shoveled off to inferior product.

Dexter Goei, the CEO of Altice USA, commented on the future of his business earlier this year.

“Everything is going to be IP-based, and then the question is because everything is IP-based, and you have so many different choices…” Goei said in an interview. “What the cable bundle is doing today is putting together everything that’s available in the OTT world and providing it to you in a good format for you to be able to guide yourself through lots of different options in the way you watch television.”