Another Game of Thrones Spinoff Is in the Works 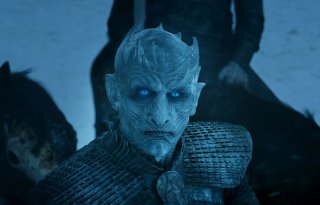 HBO showed its final episode of Game of Thrones in May of 2019, but even before that, the premium channel was looking to keep the popular franchise going with spinoffs, to be drawn from other aspects of author George R.R. Martin’s “A Song of Ice and Fire” world. At one point, HBO was said to be considering up to five different pitches for potential new series, set in Martin’s universe.

HBO first announced a spinoff in 2018, which was untitled but was to star Naomi Watts. A pilot for that show was even shot, but the network ultimately opted to not go ahead with it.

However, at the same time of that cancellation, HBO announced that it was in fact moving forward with a spinoff, to be titled House of the Dragon. The show will focus on House Targaryen, at a time a couple of hundred years prior to the events of the main Game of Thrones series. So we won’t see any of the characters from Game of Thrones, although it’s likely that familiar locations will be part of the show, as well as iconic elements like swords and dragons.

House of the Dragon, will star Olivia Cooke, Paddy Considine, Matt Smith, and Rhys Ifans, and the ten-episode first season is set to arrive sometime in 2022, although a specific release date has yet to be announced. A teaser trailer was released earlier this fall. The showrunners of Game of Thrones for its entire run, David Benioff and D.B Weiss, have since taken a deal with Netflix and will not be involved in the new show.

Now, there are reports that another Thrones project is in the works at HBO.

According to Variety, another prequel series called Tales of Dunk and Egg is in the works, and Steve Conrad—creator of the Amazon series Patriot—has been hired as the writer and executive producer. Variety is calling it a “potential series.”

Tales of Dunk and Egg is based on three novels published by Martin, all of which arrived prior to the debut of the Game of Thrones series in 2012. Those are set about ninety years prior to the start of the A Song of Ice and Fire novels.

The series, if it moves forward further, would debut on the HBO Max streaming service. Variety also reported that some other series are in the works from the A Song of Ice and Fire universe, including multiple animated shows, and also series called 10,000 Ships and Sea Snake.

The distribution model for such shows has changed quite a bit since Game of Thrones made its debut, less than ten years ago. Back then, each episode debuted on HBO on Sunday night, with re-runs throughout the week on the different HBO channels. The HBO Go streaming app, which made episodes of the show available to stream for HBO subscribers, launched in 2010, although there was no way for non-subscribers to legally purchase the show. This led the series to become the most commonly pirated show on TV, a distinction it would retain for its entire run.

In 2012, a fan launched a web campaign called Take My Money, HBO, asking for the option to pay for a streaming-only subscription. In 2015, HBO did just that, launching HBO Now, a version of HBO Go for cord-cutters.

In 2020, following AT&T’s purchase of parent company WarnerMedia, the HBO Max streaming service launched, and it remains the place to watch both the original Game of Thrones series and the upcoming spinoffs. After widespread confusion over which app was which, the company announced later in 2020 that it was phasing out HBO Now and HBO Go.

Meanwhile, there’s no word on Martin may finish The Winds of Winter, the long-delayed sixth book in the main A Song of Ice and Fire series. It was once debated whether the series might get ahead of the plots of the books, but with the series ending more than two years ago, the book remains unpublished. Martin acknowledged in early 2016—nearly six years ago—that he would not be meeting a planned end-of-year deadline for handing in his manuscript, although numerous sample chapters have been released over the years.

The fan site Winter is Coming noted some quotes from Martin’s representative in a new book about HBO, that seem to indicate he was unhappy with the direction of the Thrones series in its later seasons.

“George loves Dan and Dave, but after season 5 he did start to worry about the path they were [going down] because George knows where the story goes. He started saying, ‘You’re not following my template.’ The first 5 seasons stuck to George’s roadmap. Then they went off George’s roadmap,” Paul Haas, Martin’s representative, says in  Tinderbox: HBO’s Ruthless Pursuit of New Frontiers, a newly published book by James Andrew Miller.