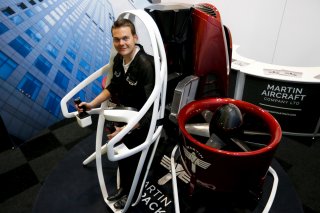 Remember the mystery of the Jetpack Guy?

On a couple of occasions in 2020, there were reports that what appeared to be a man in a jetpack was seen flying, near Los Angeles International Airport.

In August, a JetBlue pilot claimed to have seen what looked like a man in a jetpack in Los Angeles, and there was another such sighting in October, by a China Airlines pilot. The former sighting was at three thousand feet above sea level, while the second was twice as high.

The FBI said at the time that it was looking into what was happening with the jetpacks, and had been in touch with the Federal Aviation Administration.

There are two companies that make actual jetpacks, one of which happens to be headquartered in Los Angeles. The founder of that company, JetPack Aviation, said in a TV interview last fall that he didn’t think the jetpack man was actually in a jetpack, or a man, arguing that it may have been a drone and that for such a jetpack to have taken off or landed would have probably made so much noise that it almost certainly wouldn’t have escaped notice.

The mystery was never definitively solved, but a new report suggested that perhaps the “jetpack guy” was actually a drone, albeit one made to look like a man in a jetpack.

A new report by The War Zone quotes a man named John Greenewald, described as “a vigorous filer of Freedom Of Information Act (FOIA) requests,” obtained some government documents through the FOIA process that shed new light on the jetpack incidents, and specifically the discussions FAA officials had with one another.

One possibility shared by several of the government officials quoted in the documents was that the “jetpack guy” was in fact a drone, one intentionally made to look like a man in a jetpack. One even produced a YouTube video from 2019, featuring just such a drone- and one of the pilots stating outright that “jetpack guy” looked a lot like the drone in the video.

The documents also included an interview with David Mayman, the chief test pilot of the Los Angeles-based JetPack Aviation, and the man quoted in the TV interview, who said that his operation had not flown in months, at the point of the sighting.

The mystery, alas, remains a mystery.

“All told, the case of the ‘jet pack guy’ seems to be very much open from what we know now. It's still interesting to know that FAA officials investigating the matter have been exploring similar and, in some cases, identical avenues to try to solve this mystery,” the War Zone site concluded. “While a drone dressed-up to look like a jet pack guy remains one theory, we still have no conclusive idea as to what or who the elusive Los Angeles rocketeer actually is.”