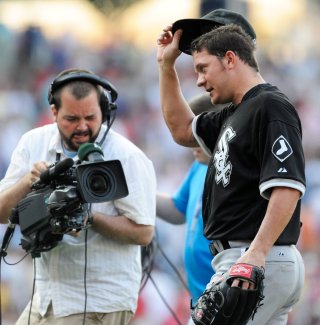 Amid ongoing discussions regarding what streaming service will end up becoming the new home of NFL Sunday Ticket, Apple has often been mentioned as one of the favorites. After all, the NFL would like to get access to the millions of people who own an iPhone or other Apple device, and an Apple deal would reach considerably more people than the league’s current Sunday Ticket partner, DirecTV.

There’s one thing to keep in mind when it comes to those talks: Apple has never been a sports broadcaster before. It doesn’t have a sports arm, nor does it employ any broadcasters or producers. One of its reported rivals for the Sunday Ticket package, Amazon, currently streams NFL games and recently became the exclusive league partner for Thursday Night Football.

But now, a new report says Apple is bidding on a different major sports deal.

The New York Post reported Tuesday that Apple is in “serious” talks with Major League Baseball about a deal to stream baseball games nationally, presumably on Apple TV+. No dollar figure was stated for the rights fee Apple would pay to the league.

The report noted that while Apple has not been a broadcaster before, the company and the MLB have long had a business relationship, with the MLB app part of the App Store when it first launched in 2008.

The deal would be for national weekday games, which were formerly aired on ESPN. ESPN will continue to broadcast the weekly Sunday Night Baseball game. If Apple acquired the package they would presumably hire a production and broadcast team in time for the 2022 season.

There were reports last year that the controversial sports media company Barstool Sports was considering taking over a mid-week games package, but it doesn't appear those talks led to anything close to a deal.

The MLB is currently in the midst of an offseason lockout, and if the Apple deal happens, MLB games would not appear on the streaming service until the lockout is resolved.

It’s worth noting that the package in question is for national games, which are separate from the local broadcasts that are produced for each individual team in the league. Such games are mostly shown on regional sports networks (RSNs), although there are indications that the RSN model is declining.

For years, live sports were considered “DVR-proof,” making them attractive destinations for advertisers and leading many sports teams to sign lucrative, long-term contracts with local networks to carry their games. This model became a major factor in the business of pro sports. But with more and more people getting rid of cable, the cord-cutting trend has begun to eat into that revenue. The NFL, in which all games are broadcast through national networks and there are no local TV contracts, has largely been insulated from this.

The Sinclair subsidiary Diamond Sports Group, which holds the rights for more than half the teams in baseball, was said to be in danger of bankruptcy, Sports Business Journal reported last fall.

And while Sinclair has discussed launching its own streaming service for local games, MLB Commissioner Rob Manfred indicated in October that the MLB would prefer to launch its own service and said that Sinclair did not own enough rights to have its own service. The league already offers a service called MLB.tv that allows fans to watch out-of-market games, but that service blacks out broadcasts by the team in the user’s home market.

The New York Post reported in October that the MLB was indeed in talks to “launch a nationwide video-streaming service that would enable fans to watch their teams’ hometown games,” with other leagues possibly joining them in the effort.

However, there have been no reports since then about the league’s plans for such a service, and it’s possible that the idea was leaked as a type of leverage in negotiations with the existing RSNs.

On Monday, Front Office Sports reported that Sinclair was nearing a deal with the NBA to air the league’s games on a new streaming service that would allow cord-cutters to watch local NBA broadcasts. The report also stated that Sinclair had secured a separate $600 million in new financing to “support the expansion,” adding that the Diamond Sports Group currently holds $8.1 billion in debt. That new service would roll out in the first half of this year, according to the report. Sinclair already has a similar deal in place with the National Hockey League.