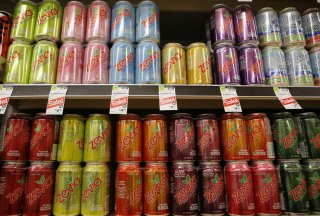 A new study out of France has found that much like sugar-laden beverages, artificially sweetened drinks also increase the risk of heart disease.

“Our study suggests artificially sweetened beverages may not be a healthy substitute for sugar drinks, and these data provide additional arguments to fuel the current debate on taxes, labeling, and regulation of sugary drinks and artificially sweetened beverages,” lead author Eloi Chazelas, a doctoral student and member of the nutritional epidemiology research team at the Sorbonne Paris Nord University, said in a statement.

The research, which was published in the Journal of the American College of Cardiology, was able to analyze data on more than one hundred thousand adult French volunteers participating in the French NutriNet-Santé, an ongoing national nutritional study launched in 2009.

The participants—separated into three groups of nonusers, low consumers, and high consumers of diet or sugary drinks—were asked to fill out three validated web-based 24-hour dietary records every six months.

Sugary beverages included soft drinks, fruit drinks, and syrups that contained at least 5 percent sugar, as well as 100 percent fruit juice. The diet beverages only had non-nutritive sweeteners like aspartame or sucralose and natural sweeteners like stevia.

What the researchers eventually discovered was that compared to individuals who didn’t drink artificially sweetened beverages, high consumers of diet drinks were 20 percent more likely to suffer from cardiovascular disease at any given time. Similar results were seen with high consumers of sugary beverages when compared to non-drinkers.

There are several other notable studies that seem to support the findings that diet and sugary beverages are strongly linked to heart issues, along with stroke, dementia, Type 2 diabetes, obesity, and metabolic syndrome, a cluster of conditions that can increase the risk of heart disease.

One particular study from last year found that consuming two or more of any kind of artificially sweetened drinks per day was associated with an increased risk of clot-based strokes, heart attacks, and premature death in women aged over fifty.

The risks were highest for women with no history of heart disease or diabetes and those who were obese or African American, according to the findings by the American Heart Association and American Stroke Association.

In another study from last year, the International Agency for Research on Cancer tapped into data from nearly 452,000 people from ten European countries to conclude that death from all causes was higher among people who drank two or more soft drinks a day, no matter how they were sweetened.

“This study found that consumption of total, sugar-sweetened, and artificially sweetened soft drinks was positively associated with all-cause deaths in this large European cohort,” the researchers wrote. “The results are supportive of public health campaigns aimed at limiting the consumption of soft drinks.”