CES: LG Shows the Next Generation of OLED TV, and More 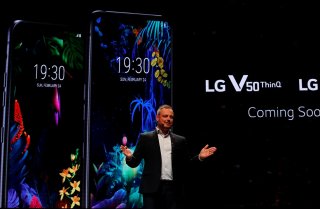 LG Electronics has been perhaps the most respected name in TV the last few years, emerging as the leader in the OLED space. In RTINGS’s current rankings of the best TVs available on the market, LG OLED models take up the top six spots, and eight of the top ten.

In its CES virtual presentation Monday morning, with the theme “Life is On,” LG showed what to expect from the next generation of its OLED TVs.

What appears to be the flagship of the new line is the LG G1 Gallery Series, which features what’s known as an “OLED Evo” panel, and comes in a new screen size for LG, eighty-three inches.

“It makes all content look better,” Alessi said of the new processor. It can even, he said, tell which genre-specific shows are.

The company also announced a redesign of the webOS home screen, which will make it easier for users to find “the content you want to watch,” Alessi said. Also getting an update is the Magic Remote, which will let users tap it to mirror from their smartphone to their TV, or vice versa.

Alessi called the LG OLED TVs “a dream come true for anyone who loves cinema,” also touted the partnership it announced last fall with Disney, in which LG is supplying OLED TV technology to Disney’s StudioLAB. Disney’s Ben Havey appeared from the “Soul Lounge” at the El Capitan theater in Hollywood, where Disney holds its movie premieres.

LG also discussed new versions of some of its non-OLED TVs, including the Nanocell line- described as “our most advanced LCD TVs to date,” and QNED TVs, which come in “ultra-large screen sizes,” in both 4K and 8K.

The company, in a not-so-subtle press release, used the headline “LG To Reinforce Industry Dominance With Ultimate TV Technology.”

“Our commitment to raising the industry bar and increasing value for consumers are both clearly evident in the 2021 LG OLED TV lineup,” Park Hyoung-sei, the president of the LG Home Entertainment Company, said in the release.

“Featuring LG OLED evo, our most advanced panel technology yet, our newest OLED TVs are in a league of their own, delivering another level of viewing experience we feel confident in saying is second to none.”

And beyond TV, the first half of LG’s presentation featured at-home products, as the company introduced home appliances and cleaning products, including vacuums, refrigeration, “wearable air purifier technology,” and a portable air purifier.