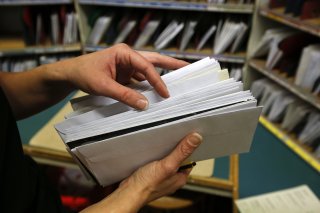 A lot of people are getting rid of cable and other traditional pay-TV these days for a lot of reasons, from a desire to save money to disinterest in paying for unused channels to wanting to get out of long-term contracts. The companies, meanwhile, are trying to incentivize customers to stay.

One cable company, according to a new report, is using a highly unconventional way of getting customers back.

According to the Los Angeles Times, Spectrum, the cable company owned by Charter Communications, has been sending letters to customers claiming they owe the cable company money—and that they risk damage to their credit if they don’t re-up as customers.

“A well-established credit history will more likely allow you to qualify for lower mortgage rates, better chances for obtaining credit cards and approvals for home rentals,” one letter to a customer said, according to the newspaper. “You have worked hard to build a great future for yourself and your family. . . . We look forward to welcoming you back.”

The letter also told the man that he had the opportunity to “to come back in good standing as a new customer” and that “when you become a customer… we will both remove your debt and cease reporting it to any credit bureau.” The company described it as a “special debt removal offer.”

The man who received the letter told the Los Angeles Times that he hadn’t been a customer of Spectrum for years- and he did not owe any money to the company. He also said that his credit report did not list any outstanding debts to the cable company and that when he called the customer service number, they found no overdue balance.

Spectrum confirmed to the newspaper that the letters were real and framed them as “an opportunity to reconnect” for former customers. A spokesman went on to tell the Los Angeles Times that the offer is to help people in debt.

“The offer eliminates their past-due balance and stops reporting of that debt to any credit bureau—both good things for the consumer—and, yes, invites them to reconnect with Spectrum internet at a promotional price,” the company spokesman told the newspaper.

According to the latest quarterly report from Leichtman Research Group, Spectrum’s parent company Charter lost about fifty thousand customers in the second quarter of 2021, leaving it with sixteen million. This makes Charter the second-largest cable provider in the United States, about three million behind Comcast, which lost nearly four hundred thousand customers.

The company did add about four hundred thousand net broadband subscribers in the quarter, giving it nearly thirty million. That puts them to Comcast, which has over thirty-one million, although both are significantly ahead of the rest of the competition.