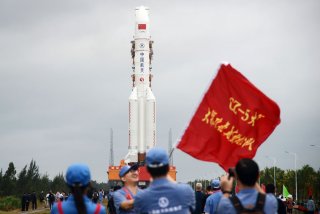 New York City residents should be thanking their lucky stars.

That’s because debris from a massive Chinese rocket narrowly missed hitting the Big Apple on Monday night, according to a report by Ars Technica.

At 100 feet long and 16 feet wide, it was the largest piece of space debris to fall uncontrolled from low-Earth orbit in nearly 30 years.

The chunks of space junk, traveling at thousands of miles per hour, mostly burned up in the atmosphere, but some of the debris were intact long enough to crash off the coast of West Africa. At least a part of the debris fell on a town in Cote d’Ivoire, although no injuries were reported, according to Quartz.

There was a high likelihood that if the Long March 5B rocket had re-entered the atmosphere about 15 to 20 minutes earlier, some of the debris could have hit the nation’s largest city.

The 20-ton Chinese rocket was successfully launched from the Wenchang Spacecraft Launch Center on Hainan Island off the country’s southern coast on May 5, transporting an unnamed prototype of a newly designed crew capsule.

Rockets generally have a first stage that propels them for the first few minutes after launch, while a second stage assists the payload in reaching orbit. The Long March 5B, however, utilized a rocket that had a single core stage and four boosters that propelled it off the launch pad.

Despite this close call, it is not the first time that China has dealt with falling debris from its own rocket launches. In November 2019, one of its rocket boosters landed on a Chinese village, spewing toxic fuel and obliterating at least one building, Ars Technica reported at the time.

There have been several other cases as well, including in 1991, when the Soviet Salyut 7 space station re-entered Earth and broke up over Argentina.

The Mir Space Station, which was decommissioned in 2001, broke apart during a controlled re-entry above the waters near Fiji. In 1979, NASA’s Skylab space station famously crashed into a small Australian town.