Code 8: Looking at the Sci-Fi Movie That's Burning up Netflix 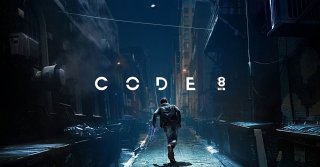 An obscure Canadian sci-fi film, from a director few have heard of and a pair of TV actors in the major roles, has been on a mainstay of Netflix's top ten list, since it showed up on the service less than a week ago.

"Code 8" was written and directed by Jeff Chan, based on his own short film of the same name from 2016. Filmed in Toronto, "Code 8" had a brief Canadian theatrical release last year, before it was picked up for distribution by XYZ Films, the international genre film specialists behind "The Raid" movies, and ultimately landed on Netflix April 11.

The film stars the cousins Robbie and Stephen Amell, both veterans of series on The CW, while Stephen is also known for his forays into professional wrestling. Also in the cast is Sung Kang, who played Han in the “Fast and Furious” series, and Canadian actress Kari Matchett. The Amells had promoted an Indiegogo campaign to help fund the film, which raised more than $2.5 million.

"Code 8" isn't groundbreaking or anything, and there aren't a lot of expensive special effects. But it does skillfully combine several genres, including sci-fi, superheroes, and even heist movies, while getting quite creative at certain points. This is much headier stuff than other things on the Netflix top ten, like say “Tiger King,” or “Love is Blind.”

The film is set in an alternate reality in which, a la the X-Men, a small percentage of humanity is gifted with superhuman powers. These people, known as Powers, are discriminated against, with their spinal fluid even harvested into a drug called Psyke. Meanwhile, the police have giant scary drones, and also cops who are fully robotic. There's an criminal gang called The Trust, and it's up to Connor (Robbie Amell) and Garrett (Stephen Amell) to stop them, while also trying to save the life of Reed's mother. In the film, much like X-Men, there are Powers on the side of both good and evil.

While most of the ideas about superpowers being marginalized outcasts is similar to what the X-Men universe has done with the them, "Code 8" does find creative storytelling uses for the powers, such as producing electricity or picking up heavy materials at construction sites. And it turns out bank heist scenes are even more fun when the robbers have the power to shoot lightning.

Why is “Code 8” such a big Netflix hit, especially with so many people home and tons of competition for eyeballs? It may have to do with the appeal of the Amell cousins, who may not be movie stars or household names but are certainly beloved by fans of the Arrowverse and their other previous work. They also have huge social media followings, and the underdog story of how the movie was made has some appeal. The Indiegogo page even has a story about police shutting down the production.

There are also some elements that resonate with our current circumstances. Code 8 is set at a time of unease and uncertainty. The police have huge, scary drones which broadcast warnings, which is a real thing. There are hints of out-of-control health care costs.

Meanwhile, "Code 8" concludes in such a way that you'd think a sequel-or more than one-is possible. But instead, a spinoff series is in development-not on Netflix, but on Quibi, the short-form streaming service that launched earlier this month.

“Code 8” is available to stream on Netflix now, in the U.S.