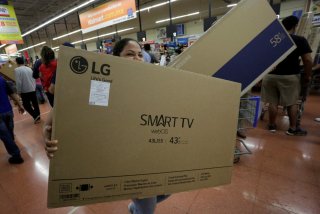 While connected TVs are now in eighty-six percent of households in the United States, the growth has slowed to the point where there may not be much more room to grow for that market.

That’s according to the data released this week by TDG (The Diffusion Group), which found that the percentage of connected TV households mostly matches that of broadband-connected households in general.

“Roughly eighty-five percent of all U.S. households now subscribe to a high-speed internet service, which speaks to its value in today’s home,”  Michael Greeson, president and principal analyst at TDG, said in the release. “However, recent data suggests the pace of new gains is quickly diminishing.”

The survey also noted where people keep the connected TVs. Eighty-three percent of those asked have connected TVs in their family or living room, which is up from seventy-seven percent last year, while fifty percent have one in their master bedroom, up from forty-one percent in 2020. As for having a connected TV in their second bedroom, 28 percent say yes, compared to twenty-two percent in 2020. The other rooms in the home have improved by less, with “den or game room” remaining flat at nine percent.

“This pattern is hardly new; rather, it follows the diffusion pattern of most all-new TV technologies—that is, as new TVs enter the household, they replace the primary TV (living/family room) which is moved to the master bedroom, then to the second bedroom, etc. and ultimately to the recycling bin/center,” TDG said.

“When products and services near saturation, growth declines to the low single digits and the market becomes a zero-sum game in which one operator’s gains are actually the losses of another,” the research firm said.

A different report from earlier this year, from Leichtman Research Group, found that more than eighty percent of U.S. households with a TV have at least one “Internet-connected TV device.”

“Use of connected TV devices leveled off over the past year after being pulled forward due to the coronavirus pandemic last year. Still, thirty-nine percent of adults watch video on a TV via a connected device daily, and sixty percent at least weekly,” Bruce Leichtman, president and principal analyst for Leichtman Research Group, Inc, said in a press statement in July.