Disney+ Review: The Right Stuff Is an Underwhelming Astronaut Show 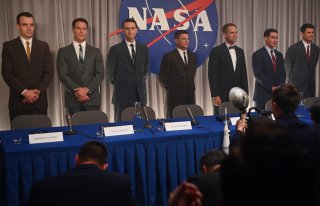 Continuing the seemingly endless series of new TV shows about the golden age of the American space program that have debuted on cable and streaming services the last few years, we now have The Right Stuff, a new series debuting this week on Disney+.

Based on Tom Wolfe’s famous book from 1979 about the Mercury astronauts, which was adapted into a movie in 1983, the new series is planned as a much more expansive adaptation of the book.

According to Disney’s PR, the eight-episode first season covers the very early days of the Mercury program, beginning in 1959, with future seasons moving the story through the ’60s and ultimately culminating with the moon landing. The 1983 Right Stuff movie, while it was 192 minutes, ended the chronology in 1967.

The show covers a lot of internal turmoil, politics and competition among the different astronauts. Disney is pitching the series as “America’s first reality show,” which is the exact wrong approach to take.

If anything, the new show is too slow. Not much of interest happens in the opening episodes, and worse than that, the main cast (led by Patrick J. Adams as John Glenn, Jake McDorman as Alan Shepard, and Colin O’Donoghue as Gord Cooper) is full of handsome but uncharismatic performers, who aren’t nearly up to the standard of the murderer’s row of actors (Ed Harris, Scott Glenn, Dennis Quaid, Sam Shepard) who played the Mercury astronauts in the Right Stuff movie.

What the series is going for here is a bit of a Mad Men vibe, emphasizing period art direction, filling the soundtrack with standards by the likes of Bobby Darin, and depicting some skirt-chasing, or at least however much skirt-chasing Disney+ will allow (the show was originally conceived for the NatGeo channel, but earlier this year was moved to the National Geographic section of Disney+.) There are even a couple of Mad Men actors, Aaron Slaton and Danny Strong, in the cast.

The difference is, Mad Men already did this and did it much better.

The Right Stuff joins numerous space-related projects of the last couple of years, including the Neil Armstrong feature film First Man, the great documentary Apollo 11, the recent Netflix documentary on the Challenger disaster, last year’s infamous drama Lucy in the Sky, and Apple TV+’s alternate-history drama For All Mankind. Also, Tom Cruise is reportedly planning to shoot a movie in space. But the less said about Netflix’s Space Force, the better.

If you’re looking for a long-form series that covers a long stretch of the space program that’s on a streaming service, ignore The Right Stuff and instead watch the late ’90s HBO miniseries From the Earth to the Moon, which is now streaming on HBO Max.

The first two episodes of The Right Stuff debut Friday on Disney+, with a new episode arriving each Friday for the next eight weeks.